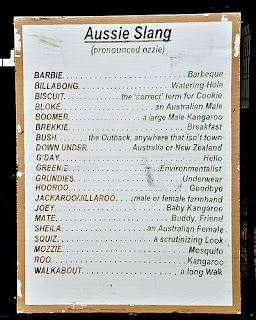 Hey everyone! Greetings once again from Sydney. We're moving along here now and have played 4 series' and are starting to get a picture of who the top contenders out here are. Also, we've had some interesting experiences since I last posted.

My last post was right before the series with Perth I believe and boy was that series something. It was definitely great seeing a familiar face and good friend Adam Melker while playing against them, as Adam and I go way back as roommates in Batavia and even playing against each other in college. However, let me tell you- the Sydney/Perth rivalry is something else. If you put the New York Yankees, Tiger Woods, and 1990's Chicago Bulls together you might come close to the Juggernaut that the Perth Heat are built up to be in the ABL. Since arriving, all anyone who follows the ABL out here could talk about is how dominant they are after winning the league both of the first 2 years-in addition to the dominance over the Sydney Blue Sox (the Blue Sox never having won a home game against them). Anyway, there was no lack of "posterboard material" and it turned out to be a hard fought series. Each game was really close and we ended up splitting 2-2, but really any one of the four games could have gone either way. It was a great experience to be a part of such a passionate rivalry and a good look into the culture of the league.
In addition to the last few series we've played, we had a weekend off and were able to see the sights of Sydney Harbour and even check out the world famous Taronga Zoo. With a view of the city from across the harbor and some of the rarest and most impressive animals in the world it was a once in a lifetime experience. Also, the longer we've been down here, the more mesmerized we've become with Australian slang and our host dad has been showing us the ropes in that regard. This link (posted above) can give you guys a good idea and we've definitely felt free to drop more than a few "blokes" and "drongos" (idiot) on each other. Using all this slang with our Aussie teammates has been good for some laughs, because they think its hilarious when we try our hand at their accent and slang. Another thing we've been indoctrinated into is the Pregame Cricket league. All this really includes is a condensed version of a cricket game-complete with cricket bats and wickets, with a single "batsman" simply trying not to get out. Its a fun way to kill time before the game- an alternative to cards I suppose. Day one in Australia for me Cricket may as well have been astrophysics, but after just about a month I can safely say I have a loose grasp on the game.

Well, back to baseball and as I said before the league is beginning to take shape. The Perth Heat are out in front right now but we are right there nipping at their heals. The Blue Sox definitely have some of the top talent in the league and we should definitely make a strong run at the Claxton Shield. After this past series in (and around) Brisbane, I don't think there is anything this team can't accomplish. Let me explain... Our first roadtrip wasn't quite what we all expected, in fact it was a lot like John Candy's movie Trains, Planes, and Automobiles. We left on Friday morning for our weekend series in Brisbane, first boarding a train to take us to the airport-roughly one hour, then an hour and a half flight into Brisbane, followed by a 3 hour bus ride into Lismore, where our first 3 games were to be played. After about 8 hours of travel (including sitting in the airport, checking in etc) we arrived at the field about 45 minutes before game time and proceeded to win 8-3. After a doubleheader on Saturday we packed up the bus Sunday morning for a two and a half hour bus ride back toward Brisbane, playing the last game of the series at another field, and then flying back to Sydney. Despite the extensive travel we finished the weekend 3-1 and were able to showcase baseball in front of several different fan bases throughout Queensland and New South Wales (separate states in the vast country) and hopefully grow the popularity of the sport out here.

In Australia, baseball is nowhere near a popular as it is in the states or in Latin America or Asia, but it is definitely growing with youth leagues and baseball academies sprouting up all over the country. Its a great experience being able to be a part of something that is affecting the popularity and growth of baseball in another country and culture.
Until Next TimeGeoff
Posted by jrocke217 at 6:56 PM