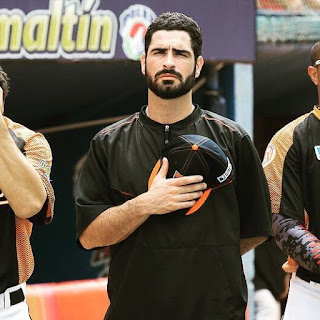 
He may not be the flashy prospect or the diamond shining in the minors but Kurt Heyer sparkles in his own way.  The 25-year old manages to fit in the system in a unique way and where it's needed.  He has shown versatility throughout the years from pitching in the rotation, sometimes in a pinch, or even tossing a few in long relief.  He quietly helps to fill the gaps in the organization and hopes that the major league reward is right around the corner.

The right-hander's ability to swing different roles makes him a perfect candidate for Mike Matheny's bullpen.  Think such guys as Brad Thompson, Carlos Villanueva, or even Matthew Bowman.  And his durability over the years should catch some eyes for a well deserved promotion to the big leagues.

Heyer is getting ready to enter his sixth professional season after being selected by the St. louis Cardinals in the 2012 amateur draft.  He has spent the last three years bouncing between Triple-A Memphis and Double-A Springfield, starting at times or getting the call from the pen.  The Arizona alumni has a career 25-29 record with 4.42 ERA, four saves, and has struck out 338 and walked 129 over 460.1 innings.

The last two winters, Heyer decided to take a chance on working on his skills outside the U.S. and toss in the Caribbean leagues.  Last season he took on the Dominican League, where he worked for Cibaenas Aguilas.  He was hired on as a reliever, but ended up in the starting rotation.   Heyer pitched well enough that Tigres del Licey selected him for their playoff roster.  He however declined and returned home.

This offseason he traveled further south and hooked up with Aguilas del Zulia.  For a short period of time he pitched alongside former teammate Boone Whiting.  There he ended up being the top arm in the rotation.  The California native held a 1-1 record, 2.25 ERA, 1.21 WHIP, and struck out ten and walked four over 24 innings.

During the 2015 Christmas holiday period, Heyer shared an update on how his offseason was progressing and returned to the site take on tougher questions for Thanksgiving 2016.


Josh Jones: How do you feel your 2016 regular season turned out in the St. Louis Cardinals organization?

Kurt Heyer: 2016 wasn't up to my standards. I take pride in putting myself into a position to be able to help the big club. I want to put this year behind me and move forward.

J.J: How did it come about that you would pitch in Venezuela? Why not return to the Dominican?

K.H.: I tried to return to the DR but unfortunately their team was already filled and no spots were available. I was fortunate enough to have my agent work out a deal with Zulia team.

J.J.: What did you intend to improve on while pitching in winter ball?

K.H.: This offseason I wanted to refine my off speed pitches, particularly my change up. I thought it would be a good opportunity to work on it against live hitters in a competitive league.

J.J.: Did you or family/friends have any concerns about you spending time in Venezuela?

K.H.: Absolutely. My family wasn't too convinced that it would be safe for me to go. My dad wanted to fly with me to make sure I was safe. But I told them that I wasn't worried and excited to go.

J.J.:  How well did the fans/club embrace you while in Venezuela?

K.H.: They took me in as one of their own. Our team was really family oriented and we were really close with the fans. They all treated me with the utmost love and respect.

J.J.: Was there any similarities/differences to pitching in Venezuela than in the Dominican?

K.H.: Yeah it felt a lot like last year when I played in the DR. I personally thought that the hitters were better and more polished. But overall it was very similar between the two.

J.J.: Why did you only pitch for a short period of time?

K.H.: I wanted to pitch as early as possible because I was still fresh and wanted to work on my pitches. Also I wanted to make sure I got a solid month before returning home. I wanted to spend more time with my family especially for the holidays.

J.J.: How were the living arrangements and area you stayed?

K.H.: It was first class. We all stayed at the Intercontinental hotel in Maracaibo. It was a five star hotel. One of the nicest hotels I have ever stayed at. The area we stayed in was a little rough, considering there weren't that many places to eat out at; but luckily we had a super market to get snacks to hold us over.

J.J.: Did you do any sight seeing, take part in Halloween activities?

K.H.: Unfortunately I did not do much sight seeing; I also didn't notice many festivities going on during Halloween in my area. I do regret not taking advantage of the sites in Venezuela.

J.J.: What adjustments did you have to make on your trip to Venezuela?

K.H.: Managing my money better. I didn't bring enough money to eat as much as I wanted. I lost a little weight during my time there. So I had to adjust eating chicken and rice most of the time. I was lucky to find places that sold food cheaper than most.

J.J.: Were there any teammates/people that helped you get settled in? (maybe Boone Whiting?)

K.H.: Yeah Boone was a huge help making my transition to Venezuela. He played their a few years ago and did a great job guiding me. Showed me the ropes of Venezuela. Also when he left, he gave me the rest of his food to hold me over. 40 cans of chunky soup and around 50 granola bars.

J.J.: How do you feel about playing for one of the best teams and being one of the top pitchers in your month long stay?

K.H.: It was awesome playing on a team that knew how to win and play great baseball. It made my job a lot easier. I was happy that I was able to do my job every time I got the ball.

J.J.: Were there any other offers to pitch for other Caribbean Series teams?

J.J.: What was it like to represent the St. Louis Cardinals and the U.S. in Venezuela?

K.H.: I was honored for the opportunity to represent my organization. There weren't many players playing in Venezuela and to be one of them was a great honor.

J.J.: Do you have any tips/recommendations for someone considering winter ball and would you return?

K.H.: Obviously bring enough money to survive. Also don't be afraid to try new things. The food was very good and it's a beautiful county. It's an experience that I would love to do again next year if possible.

K.H.: My goal is to make my debut and help the team win our 12th World Series. I want to use my failures to build me into a more complete pitcher. This season really opened my eyes and now understand fully what the Cardinals want from me.

J.J.: Do you prefer being a starting pitcher or reliever? Why?

K.H.: I prefer to do what ever the Cardinals need me to be. I've adapted as a reliever but also can still start and finish strong.

J.J.: Do you feel you are up to the challenge of pitching at the Major League level? Why?

K.H.: I've always been confident in my ability. I feel I can hold my own and when the time comes I'll dominate. Just waiting on the Cardinals for the opportunity. I'm ready.


Thank you, Kurt for taking time out of your schedule to take questions.