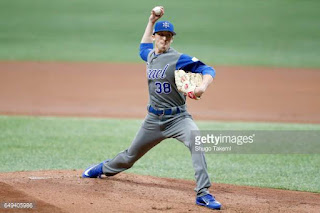 
Traveling was the name of the game for Corey Baker as his 2016 season rounded out and on through the 2017 year.  The 27-year old right-hander went from Brooklyn, NY to Israel to Jupiter, FL to Seoul, South Korea to Tokyo, Japan to Springfield, MO and finally Caracas, Venezuela.

After finishing off one of his toughest seasons in 2016, spending time with Double-A Springfield and Triple-A Memphis, he was selected to represent Israel in the World Baseball Classic.  Baker helped pitch Israel through the WBC qualifier in Brooklyn, NY in September.  He, along with a group of other players, were invited to travel to Israel in January 2017 to meet the fans and local officials.

Spring training began a couple weeks later and Baker was invited to big league camp with the St. Louis Cardinals and not more than a month after he began his trek to Seoul for the first round of the WBC.

Israel swept through their first three opponents in the first round of the WBC and the underdogs pushed on into the second round.  The second round saw much tougher competition and the team fell in two of three games in Tokyo.

Following the WBC, Baker was assigned to Springfield, where he spent the entire season.  He put up one of his best seasons (2-1 record, 2.48 ERA, career-high six saves, 32 strikeouts over 40 innings) and earned himself the Texas League Mid-Season All-Star nomination.  Baker would soon be released despite the numbers.

Baker took some time off, after the release, and prepared for winter ball in Venezuela.  Caracas was the team he negotiated with during the minor league season and took on the opportunity to showcase for possible future clubs.  He pitched for Leones up until Thanksgiving.  He made 15 appearances (one start) posting a 1-0 record, 3.74 ERA, 1.20 WHIP, four holds, and struck out 21 over 21.2 innings.

I reached out to Corey at the beginning of the Venezuelan League season to see if he would take on some questions about his past year, from the World Baseball Classic to Cardinals and Venezuela.  These questions were answered before the MLB winter meetings. 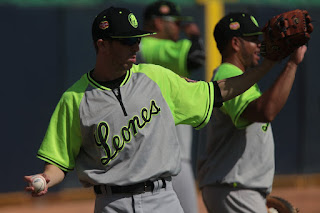 
Josh Jones: What was it like to be chosen to pitch for Israel in the World Baseball Classic and would you do it again?

Corey Baker: Pitching for Israel in the WBC was one of the best experiences of my life. It was great to represent that country and we had a lot of fun as a team. I will definitely do it again, we'll be back in 4 years.

J.J.: How does it feel to help push Israel into the second round of the WBC?

C.B.: It felt good to get that win in the first round that sent us to the second round. I don't think a lot of people expected us to move on so it was very satisfying to pitch so well and win.

C.B.: I was really happy with how I threw in 2017. From the WBC to AA to Winter Ball, I continued to get better throughout the year and I think the numbers support that.

J.J.: How do you feel your time in the Cardinals organization went?  Disappointed not making it to the majors?

C.B.: A lot comes to mind when I think about my time with the Cardinals. Obviously the goal was to pitch in the majors so on that end it wasn't a success. But I learned a lot about myself and the game and met a lot of great people along the way.

J.J.: How did it come about that you would pitch in Venezuela?

C.B.: I started speaking to Caracas during the season, and ultimately decided it would be a great place to showcase to other teams what I could do now that I am a free agent.

J.J.: What did you intend to work on while pitching in Venezuela?

C.B.: A big part of going over there was showcasing what I could do. I just wanted to keep refining all of my pitches and my delivery and I feel like I did that.

J.J.: Did you or family/friends have any concerns about you pitching in Venezuela?

C.B.: There were minor concerns, but once it was decided the league was going to take place I knew the teams would keep the players secure.

J.J.: How well did the fans/club embrace you while in Venezuela?

C.B.: The fans in Venezuela are extremely passionate. They welcomed us really well, and I had a great experience playing for Caracas. They go above and beyond to make sure we are taken care of.

J.J.: How were the living arrangements and area you stayed?

C.B.: The living arrangements were a hotel that was attached to a mall, so really we had everything we needed right underneath us.

J.J.: Did you do any sight seeing or take part on any extra activities outside of baseball?

C.B.: Unfortunetly with the state of the country we didn't get to do a whole lot outside of baseball, but I was there to play and maybe one day I will have the chance to go back and see more.

J.J: What adjustments did you have to make on your trip and stay?

C.B.: Adjustments I had to make were just figuring out how to get on a good routine and schedule when things are run just a little differently, but it helps you learn to do some stuff on the fly.

J.J.: Were there any teammates/people that helped you get settled in and comfortable?  (Jason Simontacchi)

C.B.: It definitely helped having Simontacchi down there, and eventually Miguel Socolovich came down so there were some guys that I knew. All the players on the team really do a great job of helping the imports.

J.J. How do you feel about pitching for the top team in the LVBP?

C.B.: I loved being in Caracas and we had a great team. Those guys are still winning now, and I am really pulling for them to keep winning. They do things the right way and have a great staff. Mike Rojas was great to play for and he has them going the right direction.

J.J.: Do you have any tips/recommendations for someone considering winter ball and would you return to Venezuela?

C.B.: I would say absolutely go for it. I have heard some negative things about winter ball, but everything I experienced was positive. It is a highly competitive league and it will get you better and get you a chance to experience a new culture.

C.B.: My goals for 2018 are to get to the big leagues. It is really simple for me, I have been playing professionally since 2011 I am as ready as I have ever been. I honestly feel like I just had my best season as a professional.

J.J.: Do you feel you are up to the challenge of pitching at the Major League level and why?

C.B.: As I just mentioned I think I am up for the challenge. The international experience of the WBC and pitching at the upper level of the minors has definitely gotten me to a place where I am ready to compete.

J.J.: Have there been any interest by clubs to sign you at this time?

C.B.: Right now we are just waiting for the winter meetings and some other things to fall into place, but hopefully in the next couple of weeks we'll know more about where I will end up next season.