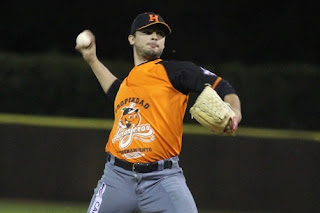 Maikel Cleto (former St. Louis-Obregon) entered in the ninth and pitched one inning.  He allowed no hits or runs, one walk, and struck one out.  (p-s:14-8)

Ramon Urias (Memphis-Mochis) started at second base and moved to third, batting fourth.  2-for-4 with one double, one run, one strikeout, and assisted in one double play.

Ildemaro Vargas (former Springfield-Lara) started at second base and batted leadoff.  1-for-5 with one home run, three RBIs, one run, one strikeout, and assisted in one double play.
Rangel Ravelo (Memphis-Lara) entered late in the game as a pinch hitter and batted ninth.  One run and one walk.

Imeldo Diaz (State College-Margarita) started at shortstop and batted fifth.  3-for-4 and assisted in one double play.

Ronny Cedeno (former St. Louis signing-Magallanes) started at second base and batted second.  1-for-6 with one run, two strikeouts, and assisted in one double play.
Pedro Rodriguez (former MiLB signing-Magallanes) entered in the ninth and pitched one inning.  He allowed one hit and no runs.  (p-s:10-7)(g/f:2-1)

Wilfredo Tovar (former Memphis-Caracas) started at shortstop and batted leadoff.  1-for-3 with one run, one hit by pitch, and one fielding error.
Leobaldo Pina (former Springfield-Caracas) entered late in the game at shortstop and moved to third base, batting leadoff.  0-for-1 at the plate.
Miguel Socolovich (former St. Louis-Caracas) entered in the tenth and pitched two innings.  He allowed no hits, one earned run, and two walks for the winning decision (1-0).  (p-s:34-18)(g/f:4-1)

Matt Pearce (Springfield-Caracas) was not yet activated: El Emergente

St. Louis pulled Dennis Ortega (Peoria-Margarita) from continuing in the LVBP and begin training for the spring: El Emergente

Donovan Solano (former Memphis-Licey) started at third base and batted second.  4-for-6 with one double, two two-out RBIs, one run, and one throwing error.

Francisco Pena (St. Louis free agent-Cibaenas) started at catcher and batted ninth.  1-for-3 with two walks, one strikeout, and allowed one stolen base.

Angel Castro (former Memphis-Azucareros) entered in the fourth and pitched to two batters.  He allowed two hits and no runs.

Audry Perez (former St. Louis-Estrellas) started at catcher and batted fifth.  0-for-3 with one RBI, one walk, and one sac fly.

Yadier Molina (St. Louis-MLB) started at catcher and batted second.  1-for-5 with one double, one two-out RBI, and two strikeouts.

Jose Calero (former GCL-Sincelejo) entered in the seventh and pitched one inning.  He allowed one hit and no runs.  (p-s:7-5)(g/f:2-1)

Notes:
Delvin Perez (State College-Carolina) is thrilled to finally have permission to play with Carolina: El Nuevo Dia
Posted by jrocke217 at 11:07 AM