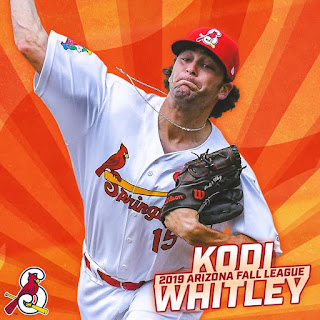 Alex Mejia (former St. Louis-Monclova) started at shortstop and batted eighth.  0-for-3 with one ground into double play and assisted in two double plays.

Xavier Scruggs (former St. Louis-Yucatan) started in right field and moved to first base, batting seventh.  1-for-3 at the plate.

Jamie Romak (former Memphis-SK) started at first base and batted second.  0-for-3 with one run, two walks, and one stolen base.

Carlos Soto (Peoria-Mochis) started in right field and batted fifth.  0-for-2 with one strikeout.

Conner Capel (Springfield-Glendale) entered late in the game in centerfield and batted second.  1-for-1 with one run.
Kodi Whitley (Memphis-Glendale) entered in the ninth and pitched one inning.  He allowed one hit, no runs, and struck two out.  (p-s:15-11)(g/f:1-0)

Notes:
Jake Burns (MiLB signing-Sydney) talks about his dream to play in MLB: ABL Official Site
Posted by jrocke217 at 11:43 AM