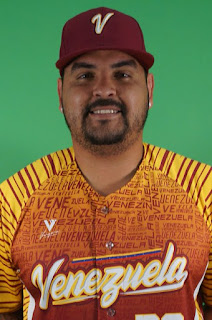 Justin Williams (Memphis-Mexicali) started as designated hitter and batted third.  3-for-4 with one RBI and one stolen base.
Xavier Scruggs (former St. Louis-Mexicali) started at first base and moved to right field, batting fourth.  1-for-3 with one double, one RBI, one run, and assisted in one double play.
Maikel Cleto (former St. Louis-Mexicali) entered in the ninth and pitched to five batters.  He allowed one hit, one earned run, two walks, and struck two out for the losing decision (0-1).  (p-s:25-13)

Niko Vasquez (former Springfield-Monterrey) started at shortstop and batted eighth.  2-for-4 with one two-out RBI.
Chris Ellis (Memphis-Monterrey) entered in the seventh and pitched one inning.  He allowed no hits or runs, hit one batter, and struck two out.  (p-s:16-12)(g/f:0-1)

Irving Lopez (Springfield-Hermosillo) entered late in the game as a designated hitter and batted eighth.  1-for-2 with one run and one strikeout.

Alexis Wilson (Peoria-Culiacan) started at catcher and batted eighth.  1-for-4 with one strikeout and threw out one base runner.

John Nogowski (Memphis-Cibaenas) started at first base and batted second.  4-for-5 with one double, one run, one stolen base, and assisted in two double plays.
Francisco Pena (former St. Louis-Cibaenas) started at catcher and batted eighth.  0-for-4 and one passed ball.
Hunter Cervenka (former Memphis-Cibaenas) entered in the fifth and pitched to five batters.  He allowed two hits, one earned run, one intentional walk, and struck one out.  (g/f:1-0)(ir-s:2-2)

Notes:
Genesis Cabrera (St. Louis-Licey) is expected to join Licey next week.  He will be used as a starter and be limited to 30-40 innings: Licey Official Site

Jose Godoy (Memphis-Venezuela) started at catcher and batted fifth.  3-for-5 with one run and one strikeout.
Williams Perez (Palm Beach-Venezuela) started and pitched five innings.  He allowed three hits, no runs, and struck five out for the winning decision.  (p-s:65-45)

Ronny Cedeno (former St. Louis signing-Magallanes) started at second base and batted third.  0-for-3 with two walks, one strikeout, and assisted in three double plays.
Wilfred Vivas (former GCL-Magallanes) started entered late in the game as a pinch runner.
Silfredo Garcia (former Springfield-Magallanes) entered in the seventh and pitched to three batters.  He allowed two hits and no runs.  (p-s:14-9)(g/f:0-1)(ir-s:2-2)

Johny Celis (former MiLB tryout-Margarita) started at first base and batted sixth.  0-for-2 with one strikeout.

Pedro Rodriguez (former MiLB signing-Lara) entered in the ninth and pitched to six batters.  He allowed two hits, three earned runs, two walks, and struck one out for the blown save (1) and losing decision (0-1).  (p-s:27-14)(g/f:1-0)

Luis Bandes (former Johnson City-La Guaira) entered late in the game at first base and batted sixth.  0-for-1 with one ground into double play.

Cesar Valera (former Palm Beach-Caribes) started in centerfield and batted eighth.  2-for-5 with one run.