Cardinals Winter League Notebook 11-9-19: Anderson Gerdel Strikes Out One & Holds One Inherited Runner On Base Over Three & A Third Scoreless Innings; John Nogowski Doubles & Drives In One Run; Alexis Wilson Singles Twice & Knocks In One Run 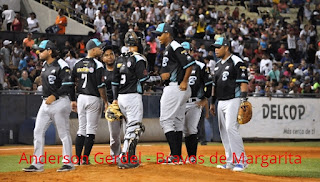 Notes:
Seibu are rumored to be ready to offer a contract to Daisuke Matsuzaka (Chunichi free agent).  Seibu was the team Matsuzaka started pro ball with: NPB On Reddit Twitter

Niko Vasquez (former Springfield-Monterrey) started at shortstop and batted sixth.  1-for-4 with one strikeout.

Irving Lopez (Springfield-Hermosillo) entered late in the game as designated hitter and batted second.  0-for-2 with one strikeout.

Alexis Wilson (Peoria-Culiacan) started at catcher and batted eighth.  2-for-4 with one RBI, one run, one passed ball, and threw out one base runner.

Hector Villalobos (State College-Mochis) entered in the ninth and pitched one inning.  He allowed three hits, three earned runs, one walk, and struck one out.  (p-s:34-23)(g/f:2-0)

Yeison Medina (former Springfield-Estrellas) entered in the ninth and pitched 1.1 innings.  He allowed one hit, one earned run, one home run, and struck one out for the losing decision (0-1).  (g/f:3-0)

Luis Bandes (former Johnson City-La Guaira) entered late in the game as designated hitter and batted sixth.  0-for-1 with one strikeout.

Vicente Campos (former MiLB signing-Lara) entered in the seventh and pitched one inning.  He allowed no hits or runs.  (p-s:13-7)(g/f:2-1)

Wilfredo Tovar (former Memphis-Caracas) started at shortstop and batted second.  2-for-5 with one strikeout and assisted in one double play.

Cesar Valera (former Palm Beach-Caribes) started in left field and batted eighth.  0-for-4 with two strikeouts.
Juan Gonzalez (former Memphis-Caribes) entered in the ninth and pitched to two batters.  He allowed one hit and no runs.  (p-s:6-4)(g/f:1-0)(ir-s:2-0)