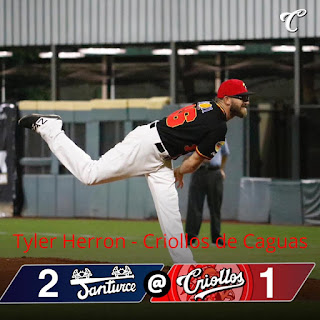 Kim Ha-Seong (Kiwoom) has interested in jumping to the MLB: Korea Joongang Daily

Fernando Salas (former St. Louis-Hermosillo) entered in the tenth and pitched one inning.  He allowed two hits, no runs, and struck one out for the save (8).  (p-s:14-9)

Xavier Scruggs (former St. Louis-Obregon) started at first base and batted sixth.  0-for-4 with two strikeouts and assisted in two double plays.

Efren Navarro (former Memphis-Culiacan) started as designated hitter and batted fifth.  1-for-5 with one double and three strikeouts.

Alberto Triunfel (former Springfield-Escogido) started at third base and batted ninth.  2-for-3 with one run, one walk, and one fielding error.

Aramis Garcia (former 2011 draft selection-Azucareros) started at catcher and batted third.  2-for-3 with one RBI, one run, and one strikeout.

Donovan Solano (former Memphis-Licey) started at third base and batted third.  2-for-3 with two runs and one strikeout.

Cesar Valera (former Palm Beach-Caribes) started at shortstop and batted third.  1-for-3 with one walk, was picked off, one fielding error, and assisted in one double play.
Gabriel Lino (former Memphis-Caribes) started at catcher and batted eighth.  1-for-3 with two runs, one walk, one passed ball, and threw out one base runner.
Juan Gonzalez (former Memphis-Caribes) entered in the ninth and pitched one inning.  He allowed no hits or runs, and struck one out.  (p-s:19-11)(g/f:2-0)

Ronny Cedeno (former MLB signing-Magallanes) started at second base and batted seventh.  4-for-4 with one home run, two RBIs, and one run.
Jorge Rondon (former St. Louis-Magallanes) entered in the fifth and pitched 1.1 innings.  He allowed one hit, one earned run, one home run, threw one wild pitch, one fielding error, and struck one out.  (p-s:23-14)(g/f:1-2)(ir-s:2-0)

Williams Perez (Springfield free agent-Lara) started and pitched three innings.  He allowed seven hits, five earned runs, three walks, hit one batter, and struck four out for the losing decision (1-2).  (p-s:68-41)(g/f:2-0)
Pedro Rodriguez (former MiLB signing-Lara) entered in the eighth and pitched to three batters.  He allowed no hits or runs, one walk, and struck one out.  (p-s:8-4)(ir-s:1-0)

Notes:
Wilfredo Tovar (former Memphis-Caracas) has come to an agreement with Minnesota, but has not yet signed: LVBP Official Site

Vicente Campos (former MiLB signing-Lara) will get an opportunity to close out games: LVBP Official Site

Anthony Garcia (former Memphis-Carolina) started as designated hitter and batted third.  0-for-2 with one run, two walks, one strikeout, and grounded into one double play.

Yariel Gonzalez (Springfield-Mayaguez) started at first base and batted seventh.  0-for-4 with two strikeouts.

Jeremy Martinez (former Memphis-Brisbane) started at catcher and batted sixth.  1-for-4, one missed catch error, and threw out one of two base runners.