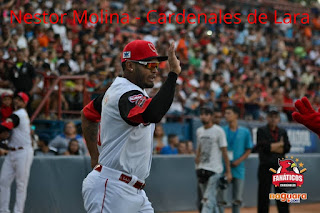 Efren Navarro (former Memphis-Culiacan) started at first base and batted fifth.  2-for-5 with one two-out RBI, one strikeout, and one fielding error.

Carlos Soto (Peoria-Mochis) started at catcher and batted ninth.  0-for-3 with three strikeouts and threw out one of two base runners.

Luis Bandes (former Johnson City-La Guaira) entered late in the game as a designated hitter and batted fifth.  1-for-1 with one RBI.

Wilfred Vivas (former GCL-Magallanes) entered late in the game at second base.

Cesar Valera (former Palm Beach-Caribes) started in left field and batted third.  2-for-3 with one double, one two-out RBI, two runs, and one walk.
Gabriel Lino (former Memphis-Caribes) started at catcher and batted eighth.  0-for-4 with two strikeouts, grounded into one double play, and allowed four stolen bases.

Yariel Gonzalez (Springfield-Mayaguez) started in left field and moved to first base, batting seventh.  0-for-4 with two strikeouts and grounded into one double play.

Anthony Garcia (former Memphis-Carolina) started in right field and moved to left, batting third.  0-for-3 with one walk.

Allen Cordoba (former Johnson City-Herrera) started in outfield and batted fifth.  1-for-4 with one double, one RBI, one run, and one strikeout.

J.R. Davis (former Peoria-Metro) started at second base and batted third.  0-for-3 with one strikeout.
Jonathan Rivera (former Johnson City-Metro) entered late in the game as a pinch hitter.  0-for-1 at the plate.

Pete Kozma (former St. Louis-Perth) started at second base and batted second.  2-for-4 with one two-out RBI, one run, one walk, and assisted in one double play.

Jeremy Martinez (former Memphis-Brisbane) entered late in the game at third base and batted fourth.  1-for-1 with one two-out RBI.

Mikey Reynolds (former Springfield-Adelaide) started at shortstop and batted third.  2-for-4 with one run, one walk, and one strikeout.

No Games Scheduled Until Thursday
Posted by jrocke217 at 11:39 AM