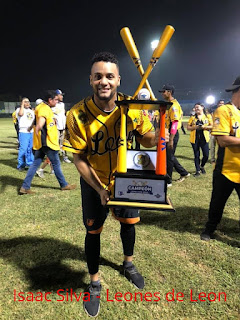 Efren Navarro (former Memphis-Culiacan) started in left field and batted sixth.  2-for-4 with one two-out RBI, one stolen base, and one strikeout.

Ramon Urias (Memphis-Mochis) started at shortstop.  He committed two fielding errors and was removed to illness.

Rangel Ravelo (St. Louis-Cibaenas) started at first base and batted third.  1-for-4 with one RBI, one run, and assisted in one double play.

Ildemaro Vargas (former Springfield-Lara) started at second base and batted leadoff.  1-for-5 with two runs, one strikeout, and assisted in two double plays.
Vicente Campos (former MiLB signing-Lara) entered in the eighth and pitched one inning.  He allowed one hit and one earned run.  (p-s:19-12)(g/f:1-1)
Pedro Rodriguez (former MiLB signing-Lara) entered in the ninth and pitched two innings.  He allowed no hits or runs, one walk, and struck two out for the winning decision (1-0).  (p-s:23-12)(g/f:1-2)(ir-s:2-0)

Kristhiam Linares (former Springfield-La Guaira) entered in the 13th and pitched to one batter.  He allowed one hit and no runs.  (p-s:2-2)(ir-s:3-1)

Cesar Valera (former Palm Beach-Caribes) started at second base and batted third.  0-for-4 with one run, one walk, one hit by pitch, one stolen base, one strikeout, and assisted in two double plays.
Gabiel Lino (former Memphis-Caribes) started at catcher and batted eighth.  0-for-5 with one walk and two strikeouts.
Liarvis Breto (MiLB signing-Caribes) entered in the eighth and pitched to three batters.  He allowed one hit and no runs.  (p-s:6-5)(g/f:2-0)
Jorge Rondon (former St. Louis-Caribes) entered in the eighth and pitched to one batter.  He allowed no hits or runs, and struck one out.  (p-s:3-3)(ir-s:1-0)

Yariel Gonzalez (Springfield-Mayaguez) started in right field and batted eighth.  0-for-4 with one stolen base, one strikeout, one outfield assist, and assisted in one double play.

Pete Kozma (former St. Louis-Perth) started at shortstop and batted second.  0-for-4 with one strikeout and assisted in two double plays.

Shane Robinson (former St. Louis-Melbourne) started in centerfield and batted second.  2-for-3 with two runs and one walk.

Jeremy Martinez (former Memphis-Brisbane) started at catcher and batted third.  2-for-3 with one home run, one two-out RBI, and two runs.

Notes:
Tournament set-up has been released for games to be played in Arizona: La Prensa
Posted by jrocke217 at 10:42 AM