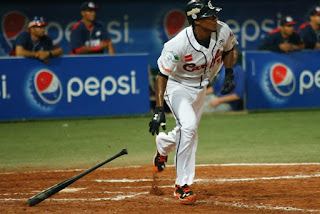 Breyvic Valera (Springfield-Margarita) started in centerfield and batted leadoff.  2-for-4 with one double, two RBIs (one w/two-outs), one run, and one sac fly.
Eliezer Alfonzo (former Peoria-Margarita) started as designated hitter and batted fourth.  1-for-4 with one run and one strikeout.
Ismael Brito (Johnson City-Margarita) entered in the fifth and pitched to two batters.  He allowed one hit and no runs.  (p-s:4-2)(g/f:0-1)

Cesar Izturis (former St. Louis-Lara) started at second base and batted sixth.  1-for-4 with one strikeout and one unassisted double play.

Ronny Cedeno (former MLB signing-Magallanes) started at shortstop and batted third.  2-for-4 with one double, one RBI, and one run.

Notes:
Dean Anna (Memphis) and Iker Franco (former Springfield) will be in the starting lineup for Obregon: Obregon Official Site