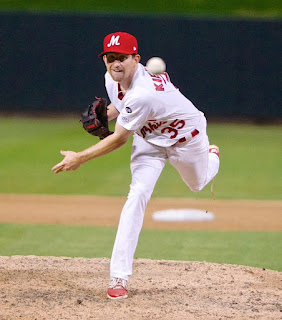 
Venezuelan League:
Eliezer Alfonzo (former Peoria-Margarita) started as designated hitter and batted fourth.  1-for-5 with one strikeout.
Ismael Brito (Johnson City-Margarita) entered in the sixth and pitched to one batter.  He allowed no hits or runs, threw one wild pitch, and struck one out.  (p-s:6-3)(ir-s:1-0)
Geudy Guerra (former VSL-Margarita) entered in the seventh and pitched to two batters.  He allowed one hit, two earned runs, and one walk for the lisign decision (1-1).  (p-s:8-2)

Ronny Cedeno (former MLB signing-Magallanes) started at shortstop and batted third.  2-for-4 with one double, one run, one hit by pitch, and assisted in two double plays.

Cesar Izturis (former St. Louis-Lara) started at second base and batted second.  0-for-3 with one walk.

Jesus Ustariz (former Johnson City-Caracas) started at third base and batted third. 1-for-3 with one run, one walk, and one strikeout.
Gerwuins Velazco (GCL-Caracas) started and pitched five innings.  He allowed seven hits, four earned runs, and two walks for the losing decision (0-1).  (g/f:9-5)

Ronnierd Garcia (State College-Caribes) entered late in the game as designated hitter and batted sixth.  0-for-1 with one run and one walk.

Carlos Torres (GCL-Margarita) started in right field and batted seventh.  1-for-2 at the plate.

Lance Zawadzki (former Memphis-Navojoa) started at third base and batted fourth.  0-for-4 with one walk.

Luis Garcia (former New Haven-Hermosillo) entered late in the game as a pinch hitter and batted seventh.  0-for-1 at the plate.

Iker Franco (former Springfield-Obregon) started at catcher and batted eighth.  0-for-2 with two walks, one caught stealing, and assisted in one double play.
Ramon Delgado (former Memphis-Obregon) started and pitched five innings.  He allowed eight hits, five earned runs, one home run, one walk, hit one batter, and struck three out for the winning decision (2-0).  (p-s:79-55)(g/f:6-4)

Patrick Wisdom (Peoria-Surprise) started at third base and batted fifth. 2-for-4 with one RBI and one strikeout.
Michael Ohlman (Springfield-Surprise) started at catcher and batted seventh.  0-for-3 with one two-out RBI, one walk, one strikeout, and allowed two stolen bases.
Luke Weaver (Palm Beach-Surprise) entered in the fifth and pitched three innings.  He allowed one hit, one unearned run, one walk, struck one out, and picked one base runner off for the hold (2).  (p-s:48-31)(g/f:4-4)
Dean Kiekhefer (Memphis-Surprise) entered in the eighth and pitched two innings.  He allowed no hits or runs, and struck one out for the save (1).  (p-s:19-16)(g/f:3-2)

Xavier Scruggs (Memphis-Cibao) started at first base and batted fourth.  0-for-3 with one run, two walks, and one strikeout.
Luis Perdomo (former Springfield-Cibao) entered in the ninth and pitched one inning.  He allowed two hits, one earned run, and struck one out.  (p-s:7-7)(g/f:1-0)

Alberto Rosario (Springfield-Estrellas) entered late in the game at catcher and batted fourth.  1-for-1 with one run, allowed one stolen base, and assisted in one double play.

Notes:
Curt Smith (former Springfield) made the Netherlands roster: Mister Baseball
Posted by jrocke217 at 10:15 AM