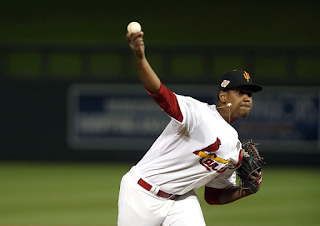 Dail Villanueva (former Quad Cities-Caracas) entered in the sixth and pitched to two batters.  He allowed one hit, one earned run, and one home run for the blown save (1) and losing decision (0-1).  (p-s:6-3)(ir-s:1-1)

Jeremy Hazelbaker (Memphis-Caribes) started in right field and batted fifth.  0-for-4 with one strikeout.
David Oca (State College-Caribes) entered in the sixth and pitched to two batters.  He allowed one hit and one earned run.  (p-s:9-5)(g/f:1-0)
Pedro Rodriguez (former MiLB signing-Caribes) entered in the ninth and pitched one inning.  He allowed no hits or runs, and struck one out for the save (1).  (p-s:13-9)(g/f:1-0)

Breyvic Valera (Springfield-Margarita) started in centerfield and batted leadoff.  0-for-4 at the plate.
Eliezer Alfonzo (former Peoria-Margarita) started at first base and batted fourth.  1-for-4 with one RBI, one strikeout, and assisted in one double play.
Ismael Brito (Johnson City-Margarita) entered in the sixth and pitched to three batters.  He allowed no hits one unearned run, committed two errors (one throwing and one fielding), and struck one out.  (p-s:10-7)(g/f:2-0)
Geudy Guerra (former VSL-Margarita) entered in the sixth and pitched one inning.  He allowed three hits, one earned run, and struck one out.  (p-s:20-12)(g/f:1-1)(ir-s:1-1)

Ronny Cedeno (former MLB signing-Magallanes) started at shortstop and batted third.  0-for-3 with one sacrifice, one strikeout, grounded into one double play, and one throwing error.

Ildemaro Vargas (former Palm Beach-Lara) started at second base and batted leadoff.  1-for-4 with one sacrifice and assisted in two double plays.

Dean Anna (Memphis-Obregon) started at third base and batted leadoff.  1-for-3 with one double, one walk, and two strikeouts.

Lance Zawadzki (former Memphis-Navojoa) started at third base and moved to shortstop, batting fourth.  1-for-4 with one double and one walk.