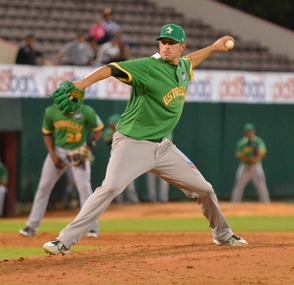 Cesar Valera (former Palm Beach-Caribes) entered late in the game at shortstop and batted fourth.  1-for-1 with one walk and one caught stealing.
Jeremy Hazelbaker (Memphis-Caribes) started in right field and batted sixth.  4-for-4 with one double, one run, and one stolen base.
David Oca (State College-Caribes) entered in the fifth and pitched to two batters.  He allowed two hits and no runs.  (p-s:5-4)
Roberto Canache (former Johnson City-Caribes) entered in the seventh and pitched 1.1 innings.  He allowed one hit, no runs, and one walk.  (p-s:15-7)(g/f:1-1)(ir-s:1-1)

Jose Martinez (former Springfield-Aragua) started at second base and batted sixth.  0-for-2 with one run, one walk, and one strikeout.

Luis Garcia (former New Haven-Hermosillo) entered late in the game as a pinch hitter and batted ninth.  0-for-1 with one strikeout.

Xavier Scruggs (St. Louis-Cibao) started at first base and batted fourth.  0-for-3, one fielding error, and assisted in one double play.

Ruben Gotay (former Memphis-Mayaguez) started at first base and batted fifth.  2-for-3 with one walk and one strikeout.

No Games Scheduled For Monday
Posted by jrocke217 at 10:42 AM