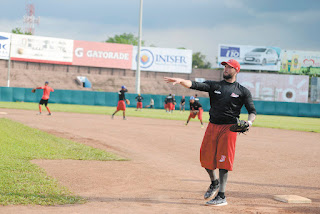 Jeremy Hazelbaker (Memphis free agent-Caribes) started in left field and batted third.  1-for-3 with one home run, one two-out RBI, one run, and one walk, and one strikeout.
Cesar Valera (former Palm Beach-Caribes) started at second base and batted seventh.  1-for-2 with one RBI, one walk, one strikeout, and assisted in one double play.
Roberto Canache (former Johnson City-Caribes) entered in the fourth and pitched 1.2 innings.  He allowed two hits, no runs, and struck two out.  (p-s:29-19)(g/f:2-1)
Alirio Negrette (former DSL-Caribes) entered in the seventh and pitched 1.1 innings.  He allowed one hit, one earned run, threw two wild pitches, and struck one out.  (p-s:22-14)(g/f:1-1)

Eliezer Alfonzo (former Peoria-Margarita) started as designated hitter and batted second.  2-for-4 with two two-out RBIs, one walk, and one strikeout.
Breyvic Valera (former Springfield-Margarita) started at third base and batted sixth.  0-for-3 with one run, one walk, one strikeout, and assisted in one double play.
Justin Wright (Memphis-Margarita) entered in the ninth and pitched one inning.  He allowed one hit and no runs.  (p-s:17-13)(g/f:1-1)

Ildemaro Vargas (former Springfield-Lara) started at second base and batted second.  3-for-5 with one double, two two-out RBIs, one run, and assisted in three double plays.
Richard Castillo (former Memphis-Lara) entered in the ninth and pitched one inning.  He allowed one hit and no runs.  (p-s:6-4)(g/f:2-1)

Jeremy Hazelbaker (Memphis free agent-Caribes) extended his hitting streak to 13 games and will be leaving the team on December 4, 2015: LVBP Official Site

Iker Franco (former Springfield-Obregon) started at catcher and batted ninth.  0-for-2 with one walk, one strikeout, and allowed one stolen base.

David Bergin (former Quad Cities-Boer) started in right field and batted fifth.  1-for-3 with two RBIs, one sac fly, and two strikeouts.  Took over as reliever in the ninth and pitched one inning, allowing one hit and no runs.  (g/f:0-2)
Edgard Montiel (former DSL-Boer) started as designated hitter and batted eighth.  2-for-3 with one walk and one strikeout.

October 25, 2015:
Ronald Ramirez (former Palm Beach-Barranquilla) started at shortstop and batted ninth.  1-for-3 with one RBI, two runs, one walk, one strikeout, and one throwing error.

Jose Calero (former GCL-Sincelejo) entered in the fifth and pitched three innings.  He allowed no hits or runs, and struck two out.

Notes:
The league is negotiating for the rights to Cuban Freddy Asiel Alvarez: Cuban Play

Notes:
Hector Salazar (former GCL-Panama Metro) was selected to play for the country against Peru: TVMax
Posted by jrocke217 at 12:27 PM