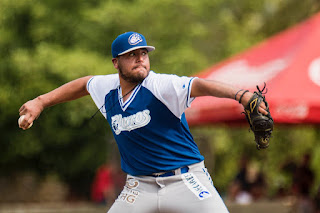 Carlos Soto (GCL-Mochis) entered late in the game at first base and batted fourth.  0-for-2 with one RBI and one strikeout.
Hector Villalobos (MiLB signing-Mochis) entered in the seventh and pitched one inning.  He allowed two hits and no runs.  (p-s:18-12)(g/f:0-3)

Jesus Cruz (State College-Jalisco) entered in the eighth and pitched one inning.  He allowed no hits or runs, and struck one out.  (p-s:10-6)(g/f:1-1)

Randy Arozarena (Springfield-Navojoa) started in right field and batted leadoff.  1-for-4 with one hit by pitch.

Richy Pedroza (former Peoria-Obregon) started at shortstop and batted ninth.  1-for-2 with one RBI, one run, one walk, one sacrifice, and assisted in one double play.

Notes:
League is on hiatus until after the Central American Games until December 19, 2017.

Jose Almarante (former Memphis-Metro) has made one start posting a 1-0 record and 0.00 ERA.  He's allowed four hits, no runs, and struck six out over seven innings.
Posted by jrocke217 at 10:33 AM