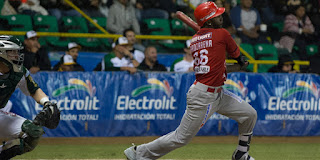 Jesus Cruz (State College-Jalisco) entered in the third and pitched two innings.  He allowed no hits or runs, three walks, hit one batter, and struck one out.  (p-s:40-20)(g/f:2-3)
Robert Stock (former Palm Beach-Jalisco) entered in the ninth and pitched to seven batters.  He allowed three hits, four earned runs, two walks, and struck one out.  (p-s:25-13)(g/f:1-0)

Richy Pedroza (former Peoria-Obregon) started at shortstop and batted second.  3-for-4 with one caught stealing and assisted in two double plays.

Breyvic Valera (St. Louis-Margarita) started at second base and batted third.  1-for-3 with one RBI, one run, and grounded into one double play/
Kevin Medrano (former 2011 draft selection-Margarita) started at shortstop and batted sixth.  1-for-2 with one walk and one strikeout.
Kender Villegas (former Palm Beach-Margarita) entered in the sixth and pitched to three batters. He allowed no hits, one earned run, and one intentional walk.  (p-s:7-5)(g/f:2-0)(ir-s:2-1)

Richard Castillo (former Memphis-Zulia) entered in the ninth and pitched one inning.  He allowed one hit, no runs, and struck one out.  (p-s:12-9)(g/f:2-0)

Rafael Ortega (former Memphis-Caribes) started in centerfield and batted leadoff.  2-for-4 with one strikeout and one outfield assist.

Ildemaro Vargas (former Springfield-Lara) started at second base and batted leadoff.  0-for-5 with one run, grounded into one double play, and assisted in one double play.

Cesar Valera (former Palm Beach-Caribes) is looked at as an important piece to Caribes' future: Lider

Rangel Ravelo (Memphis-Lara) was removed from the Lara active roster with a thigh injury: Lider

Donovan Solano (former Memphis-Licey) started at third base and batted eighth.  3-for-5 with one double, one RBI, one run, one throwing error, and assisted in one double play.

Angel Castro (former Memphis-Cibaenas) entered in the second and pitched three innings.  He allowed four hits, no runs, one walk, and struck two out.  (g/f:4-1)

Sandy Alcantara (St. Louis-Cibao) entered in the fifth and pitched 1.1 innings.  He allowed one hit, no runs, three walks, and threw one wild pitch.  (g/f:4-0)