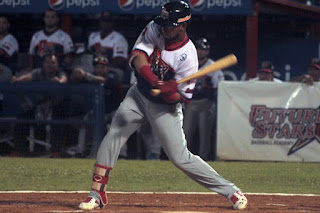 Cedric Hunter (former Memphis-Hermosillo) started in right field and batted second.  2-for-4 with one double, one run, and one strikeout.

Daric Barton (former Peoria-Jalisco) started at first base and batted fifth.  1-for-4 with one RBI, one strikeout, and assisted in one double play.
Niko Vasquez (former Springfield-Jalisco) started at third base and base and batted eighth.  2-for-3 with one home run, two RBIs, three runs, one walk, one fielding error, and assisted in one double play.
Joe Colon (former MiLB signing-Jalisco) entered in the eighth and pitched to four batters.  He allowed one hit, no runs, one walk, and struck two out for the hold (1).  (p-s:19-11)

Ramon Urias (Memphis-Mochis) started at shortstop and batted third.  0-for-2 with one walk, one hit by pitch, one strikeout, one caught stealing, and assisted in one double play.

Alexis Wilson (State College-Culiacan) started at catcher and batted eighth.  0-for-3 with one sacrifice and threw out one base runner.

John Nogowski (Springfield-Obregon) started at first base and batted fifth.  0-for-3 at the plate.

Rangel Ravelo (Memphis-Lara) was cleared to continue playing after being hit by a pitch on right hand: Beisbol Play

Carlos Talavera (former Johnson City-Aragua B) started in centerfield and batted third.  2-for-4 with one home run, two RBIs, and one run.

Rainel Rosario (former Springfield-Cibaenas) started in right field and batted sixth.  1-for-5 with one triple, one run, and one caught stealing.

Magneuris Sierra (former St. Louis-Azucareros) entered late in the game in centerfield and moved to right, batting fourth.  0-for-1 with one walk.
Jacob Wilson (former Memphis-Azucareros) started at third base and batted sixth.  2-for-7 with one walk and three strikeouts.