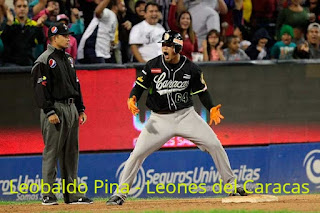 Yefri Perez (former MiLB signing-Obregon) started in centerfield and batted second.  0-for-4 with one strikeout and one fielding error.

No Game Scheduled For Sunday

Leobaldo Pina (former Springfield-Caracas) started at third base and batted second.  2-for-5 with one two-out RBI, one stolen base, one strikeout, and one caught stealing.
Wilfredo Tovar (former Memphis-Caracas) started at shortstop and batted seventh.  0-for-4 with one RBI and one strikeout.
Pedro Rodriguez (former MiLB signing-Caracas) entered in the sixth and pitched 1.1 innings.  He allowed one hit and no runs for the hold (1).  (p-s:14-9)(g/f:0-1)(ir-s:3-0)
Miguel Socolovich (former St. Louis-Caracas) entered in the ninth and pitched one inning.  He allowed one hit and no runs.  (p-s:13-9)(g/f:1-1)

The LMP is making a push to host the Caribbean Series at either Obregon or Jalisco: Meridiano

Santo Domingo, Dominican Republic is a possibility to host the Caribbean Series, start of the tournament may be pushed back two days, Azucareros or the winner of the Latin American Series could replace the LVBP champion: Listin Diario

Estrellas celebrated their LIDOM championship with a parade: El Caribe

Puerto Rico is in line to host the Caribbean Series in 2020: El Nuevo Dia

Cuba will make a strong push to host the Caribbean Series in 2020 or 2021, if they are made a member of the Confederation: Pelota Cubana Blog

Alfredo Despaigne (Granma-Softbank free agent) is focused on winning the Caribbean Series with las Tunas but leaves open the possibility for a return to Japan or even playing in the MLB: Licey Official Site
Posted by jrocke217 at 9:31 AM