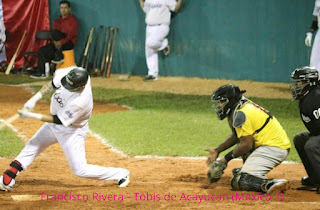 Notes:
Next season Guasave returns and Monterrey will supply a team in the LMP: LMP Official Site

Ildemaro Vargas (former Springfield-Lara) started at second base and batted leadoff.  2-for-5 with one double, two two-out RBIs, one run, one walk, and assisted in one double play.
Rangel Ravelo (Memphis-Lara) started at first base and batted fourth.  2-for-5 with one double, one RBI, one run, and assisted in two double plays.
Vicente Campos (former MiLB signing-Lara) entered in the sixth and pitched 1.1 innings.  He allowed no hits or runs.  (p-s:9-6)(g/f:1-1)(ir-s:1-0)

Leobaldo Pina (former Springfield-Caracas) started at third base and batted second.  1-for-4 with one double, two strikeouts, and one fielding error.
Wilfredo Tovar (former Memphis-Caracas) started at shortstop and batted eighth.  2-for-4 with one double, one run, and grounded into one double play.
Pedro Rodriguez (former MiLB signing-Caracas) entered in the ninth and pitched one inning.  He allowed no hits or runs, and struck one out.  (p-s:11-8)(g/f:1-0)

Jose Almarante (former Memphis-Xalapa) entered in the ninth and pitched 1.3 innings.  He allowed one hit, no runs, and struck one out for the winning decision (1-0).

Edgard Montiel (former DSL-Leon) started at first base and batted sixth.  0-for-3 with one strikeout.

Francisco Rivera (former Palm Beach-Acayucan) started at first base and batted fifth.  1-for-4 at the plate.

Francisco Rivera (former Palm Beach-Acayucan) started at first base and batted fourth.  1-for-4 with one home run, three RBIs, one run, and one intentional walk.

Jackson Solarte (former VSL-Barranquilla) entered in the sixth and pitched three innings.  He allowed no hits or runs, two walks, and struck one out.

Notes:
Many players voiced their concerns about Venezuela and the Confederation is considering Panama, Mexico, and Dominican Republic: Listin Diario

The Caribbean Series has officially been pulled from Venezuela for 2019 and start date pushed back as they search for a new location: XEU Deportes