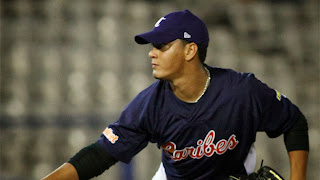 Eliezer Alfonso (former Peoria-Magallanes) started at first base and batted fifth.  1-for-4 with one strikeout.

Pedro Rodriguez (former MiLB signing-Caribes) entered in the ninth and pitched one inning.  He allowed one hit and no runs for the save (7).  (g/f:2-0)

Curt Smith (former Springfield-Mazatlan) started as designated hitter and batted sixth.  1-for-4 with one triple and one strikeout.

Russell Branyan (former St. Louis-Mexicali) started at first base and batted fourth.  1-for-4 with two strikeouts and assisted in one double play.

Jailen Peguero (Puebla-Estrellas) has signed on to pitch or Mexicali: XEU Deportes

Ivan Bellazetin (former MiLB tryout-Acayucan) started at second base an batted second. 1-for-3 with one walk, one caught stealing, and one error.

Notes:
Tony Pena (former St. Louis) was honored at the Dominican League awards ceremony for his managing of the team during the World Baseball Classic: Listin Diario

Jem Argenal (former GCL-Chinandega) 2-for-4 with one double, one RBI, and two strikeouts.
Edgard Montiel (former DSL-Chinandega) 0-for-3 with one walk and one strikeout.

Amaury Cazana (former Memphis-Boer) 2-for-3 with one RBI, one run, and one sac fly.

Jonathan Rodriguez (Palm Beach-Santurce) started at first base and batted sixth.  0-for-3 with one strikeout.

Pete Parise (former Memphis-Ponce) entered in the ninth and pitched one inning.  He allowed no hits or runs, and struck one out.  (g/f:0-2)

The league announced everything is set to open on January 4: Panama America
Posted by jrocke217 at 9:30 AM