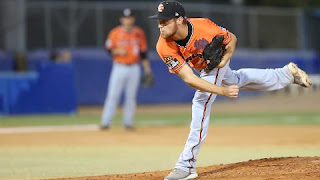 Joe Thuston (former St. Louis-Lara) stated at third base and batted leadoff.  2-for-3 with one run and one walk.

Ildemaro Vargas (Peoria-Caribes) entered in the ninth as a pinch runner and scored one run.

Ronny Cedeno (former St. Louis-Aragua) stated at shortstop and batted leadoff.  1-for-3 with one sacrifice, one fielding error, and assisted in one double play.
Jorge Rondon (Memphis-Aragua) entered in the sixth and pitched to four batters.  He allowed one hit, no runs, one walk, and struck two out.  (p-s:21-12)

Eliezer Alfonso (former Peoria-Magallanes) started as designated hitter and batted sixth.  1-for-4 with one RBI.

Jamie Romak (former Memphis-La Guaira) started in center field and moved to left, batting leadoff.  1-for-6 with one double, one RBI, one walk, and one strikeout.

Jorge Rondon (Memphis-Aragua) was a candidate for Player of the Week: Aragua Official Site

Curt Smith (former Springfield-Mazatlan) started at first base and batted sixth.  2-for-4 with two doubles and one RBI.

Fernando Salas (former St. Louis-Hermosillo) entered in the ninth and pitched one inning.  He allowed no hits or runs, and struck one out.  (p-s:14-10)(g/f:1-0)

Russell Branyan (former St. Louis-Mexicali) started at first base and batted fourth.  0-for-3 with one hit by pitch, one strikeout, one caught stealing/pickoff, and assisted in one double play.

Iker Franco (former Springfield-Obregon) started at catcher and batted ninth.  1-for-3 with one strikeout and grounded into one double play.

Ivan Bellazetin (former MiLB tryout-Acayucan) started at second base and batted second.  0-for-3 at the plate.

Hector Luna (former St. Louis-Aguilas) started as designated hitter and batted fourth.  1-for-4 with one double.

Brett Zawacki (former Springfield-Melbourne) entered in the eighth and pitched to two batters.  He allowed no hits or runs, and struck one out.  (p-s:6-4)(ir-s:3-1)

Jonathan Rodriguez (Palm Beach-Santurce) started at first base and batted sixth.  1-for-4 with one strikeout.
Ivan Maldonado (former MiLB tryout-Santurce) entered in the sixth and pitched one inning.  He allowed no hits or runs, hit one batter, and struck two out.  (g/f:0-1)

Donovan Solano (former Memphis-Barranquilla) started as designated hitter and batted third.  3-for-3 with one stolen base.
Jonathan Escudero (GCL-Barranquilla) entered in the fourth and pitched 2.1 innings.  He allowed two hits, no runs, two walks, and struck five out.

Sincelejo beat Barranquilla 7-0 in game one of doubleheader

Donovan Solano (former Memphis-Barranquilla) started as designated hitter and batted third.  0-for-1 one RBI and one walk.