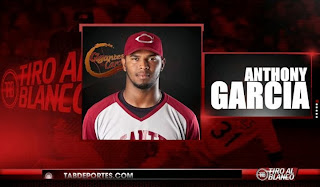 Jamie Romak (former Memphis-La Guaira) started in center field and moved to left, batting leadoff.  0-for-4 with one walk, one strikeout, and grounded into one double play.

Fernando Abad (Oakland-Azucareros) has signed on to pitch for Magallanes: Magallanes Official Site

Russell Branyan (former St. Louis-Mexicali) started at first base and batted fourth.  0-for-1 with two walks and assisted in one double play.

Luis Garcia (former New Haven-Hermosillo) started as designated hitter and batted fifth.  1-for-4 with one strikeout.
Dennys Reyes (former St. Louis-Hermosillo) entered in the sixth and pitched one inning.  He allowed no hits or runs, one walk, and struck one out.  (p-s:10-5)(g/f:1-0)

Ryan Mulhern (former 2002 draft selection-San Andres) started at first base and batted fourth.  1-for-4 with one home run, one RBI, and one run.

Ivan Bellazetin (former MiLB tryout-Acayucan) entered late in the game at second base.

Eugenio Velez (former Memphis-Licey) started in left field and batted fifth.  0-for-3 and one fielding error.
Maikel Cleto (former St. Louis-Licey) entered in the seventh and pitched to three batters.  He allowed one hit, no runs, and one walk.  (g/f:0-1)(ir-s:2-2)

Hector Luna (former St. Louis-Aguilas) started at first base and batted third.  1-for-3 with two runs, one walk, one hit by pitch, and assisted in two double plays.

Randy Ruiz (former MiLB signing-Mayaguez) started as designated hitter and batted fourth.  3-for-4 with one home run, three two-out RBIs, one run, and one strikeouts.
Luis Montanez (former Memphis-Mayaguez) started in right field and batted ninth.  0-for-3 at the plate.
Hector Hernandez (former Palm Beach-Mayaaguez) started and pitched 2.2 innings.  He allowed seven hits, four runs (two earned), threw one wild pitch, and struck one out for the losing decision (0-2).  (g/f:3-4)

Notes:
Teams will be permitted to selected two players from Santurce for the playoffs: Primera Hora

Donovan Solano (former Memphis-Barranquilla) started as designated hitter and batted fourth.  1-for-3 at the plate.