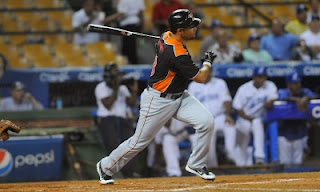 Eliezer Alfonso (former Peoria-Fanaticos) entered late in the game and went 0-for-2 with two strikeouts.

Jose Gomez (GCL-Zulia) entered late in the game at catcher.

Iker Franco (former Springfield-Obregon) started at catcher and batted ninth.  0-for-1 with one run, one walk, and allowed one stolen base.

Ivan Bellazetin (former MiLB tryout-Acayucan) started at shortstop and batted second.  0-for-5 with one strikeout.

Hugo Castellanos (former Memphis-Oluta) entered in the eighth and pitched one inning.  He allowed no hits or runs, and struck two out.

Ryan Mulhern (former 2002 draft selection-San Andres) started at first base and batted fourth.  0-for-4 with one error.

Victor Marte (Memphis free agent-Licey) entered in the fourth and pitched to three batters.  He allowed one hit, no runs, and struck one out.  (g/f:0-1)(ir-s:2-0)
Maikel Cleto (former St. Louis-Licey) entered in the seventh and pitched two innings.  He allowed one hit, one earned run, one home run, and struck five out for the losing decision (0-1).

Hector Luna (former St. Louis-Aguilas) started as designated hitter and batted fourth.  3-for-4 with two two-out RBIs and one walk.
Adam Reifer (former Memphis-Aguilas) entered in the ninth and pitched one inning.  He allowed no hits or runs, one walk, committed one fielding error, and struck one out for the save (4).  (g/f:2-1)

Amaury Cazana (former Memphis-Boer) 1-for-5 with one RBI and two strikeouts.

Jem Argenal (former GCL-Chinandega) 1-for-5 with one walk.
Edgard Montiel (former DSL-Chinandega) 0-for-2 with three walks, one strikeout, and ground into one double play.

John Rodriguez (former St. Louis-Santurce) entered in the ninth as a pinch hitter and batted fourth.  One walk at the plate.
Jonathan Rodriguez (Palm Beach-Santurce) started at third base and moved to first, batting seventh.  0-for-4 with one walk and three strikeouts.
Adron Chambers (former St. Louis-Santurce) entered in the seventh in center field and batted eighth.  0-for-2 with one strikeout.

Pete Parise (former Memphis-Ponce) entered in the ninth and pitched one inning.  He allowed two hits, one earned run, two walks, and struck two out.  (g/f:1-0)

Notes:
The All-Star game will be held on December 8, 2013: Liga PR Official Site

Current Cardinals:
Jonathan Escudero (GCL-Barranquilla) has made three relief appearances posting a 0-0 record and 0.00 ERA.  He's allowed three hits, no runs, one walk, and struck two out over 3.2 innings.

The State Department of the United States gave clearance for Cuba to return to the Caribbean Series: Listin Diario
Posted by jrocke217 at 10:25 AM