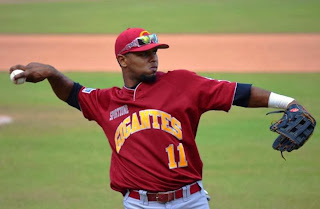 Ronny Cedeno (former St. Louis-Aragua) started at shortstop and batted eighth.  0-for-3 with two strikeouts and assisted in one double play.

Eliezer Alfonso (former Peoria-Magallanes) started as designated hitter and batted fifth.  3-for-5 with one home run, one RBI, and two runs.

Russell Branyan (former St. Louis-Mexicali) started at first base and batted fourth.  1-for-4 with two strikeouts.

Mark Hamilton (former St. Louis-Guasave) started at first base and batted fifth.  0-for-3 with one walk, one strikeout, and assisted in one double play.

Notes:
Aledmys Diaz will play one game with Culiacan On Thursday for scouts: Joel Rodriguez Twitter

Bryan Evans (Miami) has signed on to pitch for Hermosillo: Hermosillo Official Site

Ryan Mulhern (former 2002 draft selection-San Andres) started at first base and batted fourth.  0-for-4 with one strikeout.

Hugo Castellanos (former Memphis-Coatza) entered in the eighth and pitched two innings.  He allowed no hits or runs, one walk, and struck two out.

Pedro Feliz (former St. Louis-Azucareros) started at first base and batted sixth.  0-for-2 with one walk.

Jem Argenal (former GCL-Chinandega) 0-for-5 with three strikeouts.
Edgard Montiel (former DSL-Chinandega) 1-for-4 with one double, one RBI, and one sacrifice.

Notes:
Everth Cabrera (San Diego) has no plans of playing during the winter season: La Prensa

Randy Ruiz (former MiLB signing-Mayaguez) started as designated hitter and batted fourth.  2-or-4 with one home run, one RBI, one run, and two strikeouts.

Donovan Solano (former Memphis-Barranquilla) started as designated hitter and batted third.  4-for-5 with one double, one RBI, three runs, and one strikeout.

Cuba has been given permission to play in Caribbean Series which will be hosted by Margarita, but can not at this time play in 2015 series to be held in Puerto Rico due to the embargo: El Nuevo Dia

Yomiuri is showing interest in Leslie Anderson (Tampa Bay): Yakyubaka
Posted by jrocke217 at 10:10 AM