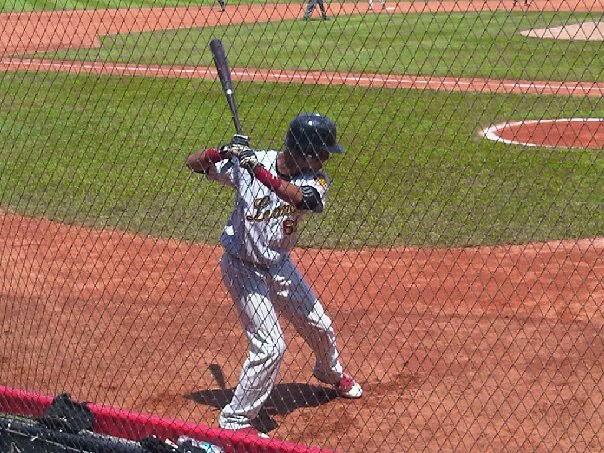 Ronny Cedeno (former St. Louis-Magallanes) started at shortstop and batted second.  1-for-4 with two runs, grounded into one double play, and assisted in one double play.

Jose Martinez (former Springfield-Aragua) started at second base and batted fourth.  1-for-3 with one run, one walk, and assisted in one double play.
Jorge Rondon (former St. Louis-Aragua) entered in the eighth and pitched one inning.  He allowed one hit and no runs.  (g/f:2-0)

Pedro Rodriguez (former MiLB signing-Caribes) entered in the ninth and pitched one inning.  He allowed one hit and no runs for the save (4).  (g/f:2-0)

Notes:
Cesar Izturis (former St. Louis-Lara) is currently dealing with an injury and could miss another week of action: El Emergente

Andy Moye (former 2010 draft selection-Margarita) will miss the rest of the season with a shoulder injury: El Emergente

Justin Christian (former Memphis-Mochis) entered late in the game as a pinch runner.

Luis Garcia (former New Haven-Hermosillo) started as designated hitter and batted fourth.  0-for-2 with one walk.

Jonathan Rodriguez (Memphis-Santurce) started at third base and moved to first, batting fourth.  1-for-5 with one double and one run.
Pedro Feliciano (former Memphis-Santurce) entered in the eighth and pitched to two batters.  He allowed no hits or runs.  (g/f:0-2)(ir-s:1-0)

Luis Mateo (Memphis free agent-Caguas) started at shortstop and batted second.  0-for-5 with one strikeout and assisted in one double play.
Justin Wright (Memphis-Caguas) entered in the eighth and pitched to five batters.  He allowed three hits and three earned runs for the blown save (1).  (g/f:1-1)

Ruben Gotay (former Memphis-San Juan) started at third base and batted third.  2-for-3 with one RBI and one hit by pitch.

Anthony Garcia (Palm Beach-Carolina) started in right field and batted fourth.  1-for-4 with one RBI.
J.C. Romero (former St. Louis-Carolina) entered in the ninth and pitched one inning.  He allowed no hits or runs, and struck one out for the save (1).  (g/f:2-0)

Ronald Castillo (Peoria-Sincelejo) singled and scored one run and Ronald Ramirez (former Palm Beach-Cartagena) struck out at the end of the game as Sincelejo beat Cartagena 4-2: El Universal and El Meridiano

Pedro Feliz (former St. Louis-Dominican Republic) started at third base and batted fifth.  1-for-5 with one RBI and two runs.