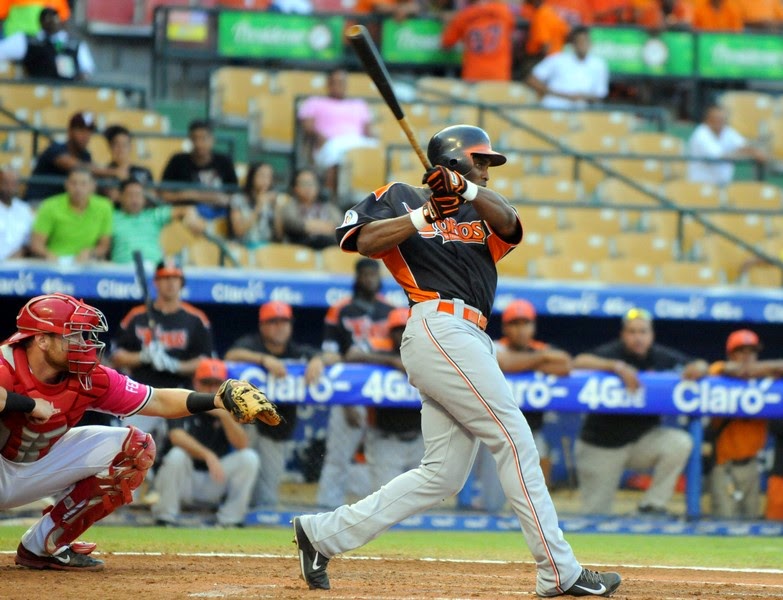 Cesar Izturis (former St. Louis-Lara) started at second base and batted second.  2-for-4 with two RBIs (one w/two-outs), one run, and one sacrifice.

Jose Martinez (former Springfield-Aragua) started at second base and batted fifth.  2-for-4 with one double, one run, one strikeout, and on throwing error.

Pedro Rodriguez (former MiLB signing-Caribes) entered in the eighth and pitched one inning.  He allowed one hit and no runs for the hold (7).  (g/f:1-2)

Justin Christian (former Memphis-Mochis) started in centerfield and batted leadoff.  2-for-5 with one double and one strikeout.

Brian Broderick (former Memphis-Jalisco) entered in the eighth and pitched to two batters.  He allowed no hits or runs,  (p-s:8-5)(g/f:1-1)

Luis Garcia (former New Haven-Hermosillo) started as designated hitter and batted sixth.  1-for-4 at the plate.

Xavier Scruggs (St. Louis-Cibao) started as designated hitter and batted seventh.  0-for-4 with one strikeout.

Jorge Sosa (former St. Louis-Escogido) entered in the ninth and pitched one inning.  He allowed no hits or runs, and struck one out.  (g/f:1-1)

Victor Marte (former St. Louis-Licey) entered in the seventh and pitched to two batters.  He allowed one hit, no runs, and one walk.  (ir-s:2-1)

Eugenio Velez (former Memphis-Azucareros) started in right field and batted leadoff.  3-for-4 with two RBIs, one run, and one strikeout.

C.J. Beatty (former Palm Beach-Brisbane) started at third base and batted fourth.  1-for-5 with one home run, two RBIs, one run, two strikeouts, and assisted in one double play.

All games for Saturday were postponed due to rain: LBPRC Official Site

Jose Calero (former GCL-Sincelejo) struck one out and kept the next two batters from reaching base in the sixth as Sincelejo beat Cartagena 10-9: El Meridiano

Softbank, Hanshin, Chunichi, and Orix are all in the process of negotiating with Chihiro Kaneko (Orix): Yakyubaka

Hanshin may add on a fourth year to the package to bring in Hiroyuki Nakajima (Oakland free agent): Yakyubaka
Posted by jrocke217 at 10:00 AM