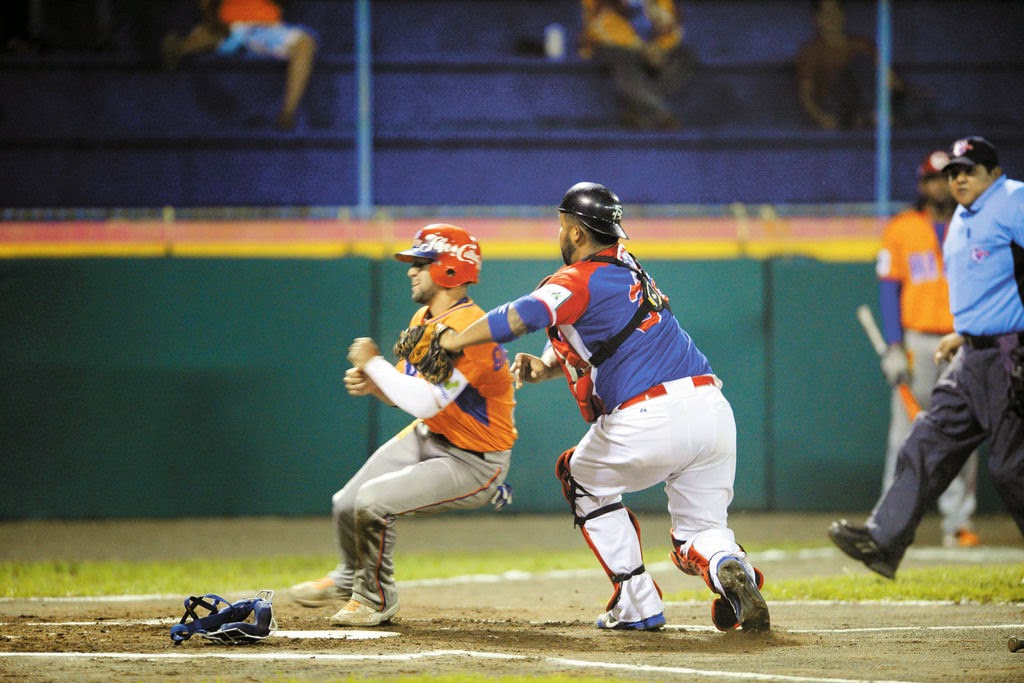 Pedro Rodriguez (former MiLB signing-Caribes) entered in the ninth and pitched one inning.  He allowed two hits and no runs for the save (6).  (p-s:19-13)(g/f:

Miguel Socolovich (MiLB signing-Caracas) entered in the eighth and pitched one inning.  He allowed no hits or runs.  (p-s:8-5)(g/f:1-1)

Jamie Romak (former Memphis-La Guaira) started at third base and batted seventh.  2-for-5 with one home run, one two-out RBI, one run, and one strikeout.

Ronny Cedeno (former St. Louis-Magallanes) started at shortstop and batted second.  1-for-3 with one home run, one RBI, one run, two walks, and one strikeout.

Richard Castillo (former Memphis-Lara) entered in the 13th and pitched to five batters.  He allowed no hits one unearned run, and two walks for the losing decision (0-2).(g/f:3-0)

Breyvic Valera (Springfield-Margarita) started art second base and batted leadoff.  3-for-6 with one double, one run, one intentional walk, one strikeout, and assisted in one double play.
David Peralta (former Johnson City-Margarita) started in right field and batted third.  2-for-5 with one RBI and one sac fly.
Luis Perdomo (former Springfield-Margarita) entered in the eighth and pitched one inning.  He allowed one hit, no runs, one walk, and struck one out.  (g/f:0-2)

Carlos Zambrano (Philadelphia free agent-Magallanes) continues to workout in the U.S. to prepare as a pitcher for Magallanes: El Emergente

Jhohan Acevedo (State College-Caracas) started in left field and batted sixth.  0-for-3 with one walk, one hit by pitch, and two strikeouts.

Justin Christian (former Memphis-Mochis) started in centerfield and batted leadoff.  2-for-4 with one two-out RBI, one run, one walk, and one strikeout.

Hugo Castellanos (former Memphis-Jalisco) entered in the eighth and pitched to one batter.  He allowed no hits or runs, and one walk.  (p-s:4-0)(ir-s:2-0)

Dennys Reyes (former St. Louis-Culiacan) entered in the seventh and pitched to one batter.  He allowed no hits or runs, and struck one out for the hold (7).  (p-s:6-3)

Audry Perez (former St. Louis-Cibaenas) started at catcher and batted seventh.  1-for-2 with one RBI, one walk, and allowed three stolen bases.

Xavier Scruggs (St. Louis-Cibao) started at first base and batted seventh.  1-for-4 with one double, one run, and assisted in three double plays.

Eugenio Velez (former Memphis-Azucareros) started in right field and batted leadoff.  0-for-5 with one run and one strikeout.

Notes:
Dominican League will check out the Cibaenas stadium and see the progress being made since the fire: LIDOM Official Site

Edgard Montiel (former DSL-Chinandega) started at first base and batted seventh.  2-for-3 with one run, two walks, and one sacrifice.

C.J. Beatty (former Palm Beach-Brisbane) started at third base and batted fourth.  0-for-3 with two strikeouts and grounded into one double play.

Luis Mateo (Memphis free agent-Caguas) started at shortstop and batted eighth.  2-for-4 at the plate.

Anthony Garcia (Palm Beach-Carolina) started in right field and batted fourth.  0-for-4 at the plate.
J.C. Romero (former St. Louis-Carolina) entered in the eighth and pitched to three batters.  He allowed no hits or runs, one walk, and struck one out.  (g/f:1-0)

Ruben Gotay (former Memphis-San Juan) started at second base and batted second.  0-for-4 with two strikeouts and one throwing error.

Softball player Javier Caballero was one of a handful of Cubans that escaped while the country participated in the Central American & Caribbean Series: El Nuevo Herald

Chihiro Kaneko (Orix) had surgery and should take three month for recovery: Yakyubaka

Orix is interested in Korean Hyeon-Jong Yang, after Kia turned down a MLB bid: Yakyubaka

Shohei Otani (Nippon Ham) said he could continue on as a pitcher and hitter if called upon by the MLB, but would lean towards throwing if necessary: Yakyubaka
Posted by jrocke217 at 10:40 AM