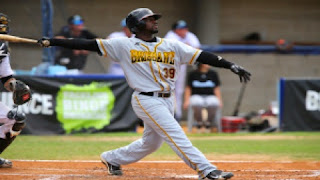 
Staying positive and making things happen in one's career is something C.J. Beatty knows all about.

Beatty, who was once a prospect on the rise in the Cardinals farm system, now seeks his second chance at a run for his MLB dream.  He was selected by the St. Louis Cardinals in the 2009 draft out of North Carolina A&T State University and made a quick jump to A-Advanced Palm Beach in his second professional season.  Unfortunately he was released during spring training in 2011 after having collected 25 doubles, ten home runs, 53 RBIs, and hitting .244 in 105 minor league games.

The 26-year old switch hitter spent the next two seasons battling it out in the independent league circuit with the now-defunct North American League and American Association, before settling in the Frontier League with the Washington Wild Things.

While with Washington, Beatty put up some of the best numbers of his baseball career hitting .292 with 39 doubles, 36 home runs, 123 RBIs, and 86 walks in 616 at-bats the last two seasons in the independent Frontier League.  The utility player also earned a spot on the All-Star rosters in 2013 and 2014.

C.J. finally got his wish and caught the eye of the Chicago White Sox and they purchased his contract and assigned him to A-Advanced Winston-Salem, where he spent the remainder of the 2014 season.

Along the long road back to affiliated ball, he made a trip to Australia to play for the Brisbane Bandits during the 2012-2013 winter season.  Beatty made a decision to return for a second tour this offseason and work on his talents and skills so he can make it further up the line to his major-league dream.

C.J. Beatty will join Cardinals Winter League to share some of his experience from the ABL

Hello from "down under" again! I was over joyed to get the opportunity to play for the Brisbane Bandits again this winter. I needed a place to play to continue to gain experience for competition here in the USA. God gave me another opportunity to play affiliated for the Chicago White Sox. Playing here in Brisbane, Australia will give me the best chance to compete for a spot this coming spring training.

When I got off the plane it felt like I had never left. I felt like I went on a long vacation. This time was to be different. More business than pleasure. This time I'm here to not only get better as a professional athlete but I'm here to help increase Brisbane's chances to garnish a Championship trophy. Things I did not miss: 1. High Prices for McDonalds 2. Extra Hot Hot Hot Heat outside everyday 3. The Huntsmen Spider 4. Vegiemite

This time I am here to play solely for the Brisbane Bandits and no club ball like last time. We are doing well as a team so far and I'm enjoying making new friends and connections. I'm here with the Tampa Bay Imports and we are having a blast learning a different culture and most of the time "aussie slang".
Posted by jrocke217 at 11:15 AM