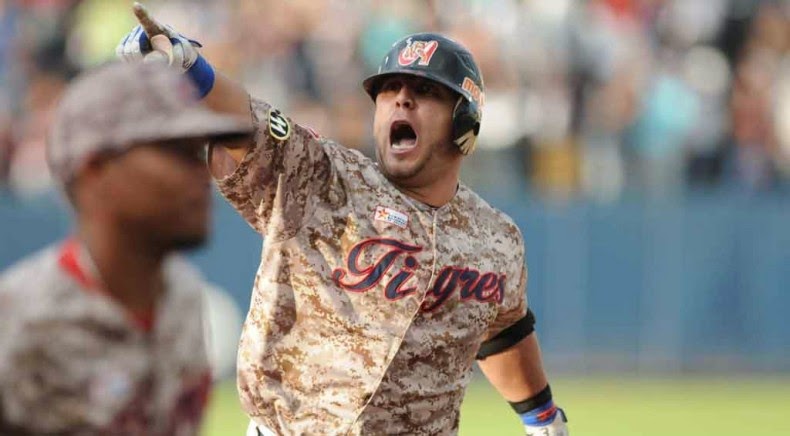 Cesar Izturis (former St. Louis-Lara) started as designated hitter and batted second.  1-for-5 with one double and one two-out RBI.

Miguel Socolovich (MiLB signing-Caracas) entered in the eighth and pitched one inning.  He allowed no hits or runs, and struck two out.  (p-s:11-8)(g/f:1-0)

Eliezer Alfonso (former Peoria-Margarita) started as designated hitter and batted fourth.  2-for-4 with one double, one RBI, one run, and one strikeout.

Ronny Cedeno (former St. Louis-Magallanes) started at shortstop and batted eighth.  0-for-3 with one walk, one strikeout, and one fielding error.

Jamie Romak (former Memphis-La Guaira) started in left field and batted sixth.  0-for-2 at the plate.

Jose Martinez (former Springfield-Aragua) started at second base and batted fifth.  2-for-3 with one double, three RBIs, one run, one walk, and assisted in two double plays.
Jorge Rondon (former St. Louis-Aragua) entered in the seventh and pitched 1.2 innings.  He allowed no hits or runs, and one walk.  (g/f:3-1)(ir-s:2-0)

Jamie Romak (former Memphis) will be with La Guaira until the end of the week: El Emergente

Justin Christian (former Memphis-Mochis) started in centerfield and batted leadoff.  2-for-5 with one double, one two-out RBI, two runs, one walk, and one strikeout.

Luis Garcia (former New Haven-Hermosillo) started at first base and batted fifth.  1-for-4 with one double and one run.

Hermosillo beat Navojoa 9-2 in game one of doubleheader

Audry Perez (former St. Louis-Cibaenas) started at catcher and batted ninth.  0-for-4 with one strikeout.

Eugenio Velez (former Memphis-Azucareros) started in right field and batted leadoff.  1-for-4 with one run, one walk, one stolen base, and one strikeout.

Jonathan Rodriguez (Memphis-Santurce) started at third base and batted seventh.  0-for-3 with one strikeout.
Ivan Maldonado (former MiLB tryout-Santurce) started and pitched 5.2 innings.  He allowed six hits, four unearned runs, hit one batter, and struck three out for the losing decision (1-1).  (g/f:7-4)

Chihiro Kaneko (Orix) has decided against posting for the MLB: Yakyubaka

Daisuke Matsuzaka (New York-N free agent) may be close to a four-year deal with Softbank: Yakyubaka

Kia and Hyeon-Jong Yang can not come to terms on accepting an MLB bid: Yonhap Hews
Posted by jrocke217 at 10:05 AM