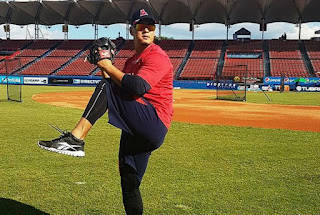 Ronny Cedeno (former MLB signing-Zulia) started at third base and batted eighth.  2-for-4 at the plate.
Pedro Rodriguez (former MiLB signing-Zulia) entered in the seventh and pitched one inning.  He allowed two hits, no runs, and struck one out for the hold (1).  (p-s:13-7)(g/f:0-1)

Donovan Solano (former Memphis-Licey) started at third base and batted fifth.  1-for-4 with one strikeout, grounded into one double play, and assisted in two double plays.

Albert Pujols (former St. Louis-Cibao) visited the Dominican Republic, invited by his pastor, to talk about his faith: Listin Diario

The Confederation will meet in Panama to discuss the return of the country to the Caribbean Series: TV Max Deportes

Notes:
Shohei Otani (Nippon Ham) may need surgery on his ankle and was removed from the Japan roster: WBC Official Site and Yakyubaka

Dewin Perez (State College) and Oscar Mercado (Palm Beach) are currently training with the Colombian team: El Meridiano
Posted by jrocke217 at 9:59 AM