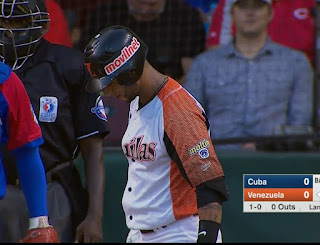 Brisbane won the series over Adelaide two games to one and will face Melbourne for the championship beginning on Friday.

Donovan Solano (former Memphis-Licey) started at third base and batted sixth.  0-for-4 with one strikeout and one fielding error.

Ruben Gotay (former Memphis-Caguas) started at first base and batted fifth.  0-for-3 with one run and two walks.

Ronny Cedeno (former MLB signing-Zulia) started at third base and batted second.  3-for-5 with one RBI, one run, and assisted in one double play.

Notes:
Yoelkis (Granma) and Yoenis Cespedes (New York-N) are similar, but not the same: ESPN Deportes