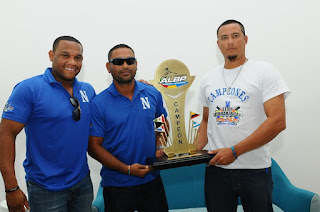 Donovan Solano (former Memphis-Licey) started at second base and batted sixth.  1-for-4 with one strikeout.

Randy Ruiz (former MiLB signing-Caguas) started as designated hitter and batted fourth.  0-for-4 with two strikeouts.
Ruben Gotay (former Memphis-Aguadilla/Caguas) started at first base and batted fifth.  0-for-3 with one walk.
J.C. Romero (former St. Louis-Santurce/Caguas) entered in the seventh and pitched to three batters.  He allowed one hit, one earned run, and one home run for the blown save (1).  (p-s:10-7)(g/f:2-0)(ir-s:2-2)

Shohei Otani (Nippon Ham) will not pitch in the World Baseball Classic due to ankle injury: Carlos Yamazaki Twitter

Jeong Keon-Woo (Hanwha) has pulled out due to knee injury: Yonhap News Agency

Carlos Martinez (St. Louis) and Alex Reyes (St. Louis) will pitch out of the rotation for the Dominican Republic: WBC Official Site

Edgar Renteria (former St. Louis-Colombia) is proud to see his team looked at like a Cinderella: El Heraldo
Posted by jrocke217 at 10:40 AM