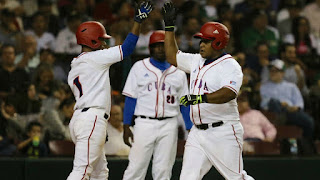 Donovan Solano (former Memphis-Licey) started at second base and batted sixth.  0-for-4 at the plate.

Ronny Cedeno (former MLB signing-Zulia) started at third base and batted second.  2-for-4 with one double, one two-out RBI, one run, one strikeout, and one fielding error.

Notes:
Licey did not have players on the roster that they had available during the LIDOM and contributed to the poor performance: ESPN Deportes