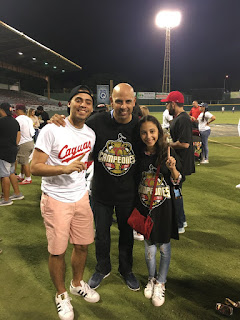 Notes:
The league is talking with Asian teams about expansion: Fox Sports

Ruben Gotay (former Memphis-Caguas) started at first base and batted fifth.  0-for-4 with one strikeout and assisted in three double plays.

Notes:
Cuba will return for a fifth consecutive season as a special guest in the 2018 Caribbean Series to be held in Barquisimeto, Venezuela: ESPN Deportes

There was a gun battle several hours before the championship game that left six dead: El Vocero

The 2017 Caribbean Series had the best attendance in the past 14 held: ESPN Deportes

The Confederation of the Caribbean will have a meeting in March to discuss adding Panama and their interest in Nicaragua and Colombia: TV Max Deportes

Notes:
The league says there are still open spots on the rosters: AWL Official Twitter

Edubray Ramos (former VSL-La Guaira) was placed on the Venezuelan reserve list and could be used in the second round: La Guaira Official Site

J.C. Sulbaran (Memphis free agent) and Curt Smith (former Springfield-Chinandega) were named to the Dutch team that will play spring trainings games from February 12-26, 2017: Mister Baseball
Posted by jrocke217 at 9:48 AM