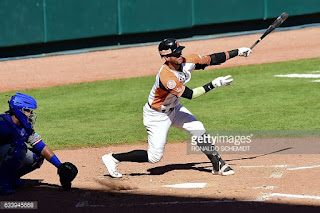 Ruben Gotay (former Memphis-Caguas) started at first base and batted fifth.  0-for-4 with one run, one walk, and one strikeout.

Ronny Cedeno (former MLB signing-Zulia) started at third base and batted second.  2-for-6 with one double, two RBIs, one run, and three strikeouts.

Alexander Ayala (Camaguey-Granma) started at shortstop and batted third.  1-for-4 with one double, two strikeouts, and assisted in one double play.
Lazaro Blanco (Granma) started and pitched seven innings.  He allowed four hits, one earned run, three walks (one intentional), and struck five out for the losing decision (1-1).  (p-s:103-60)(g/f:6-3)
Livan Moinelo (Pinar del Rio-Granma) entered in the eighth and pitched one inning.  He allowed one hit, no runs, and struck one out.  (p-s:15-9)(g/f:1-1)

Notes:
Alberto Rosario (St. Louis-Estrellas) was added to the Dominican Republic's preliminary roster: Listin Diario
Posted by jrocke217 at 10:20 AM