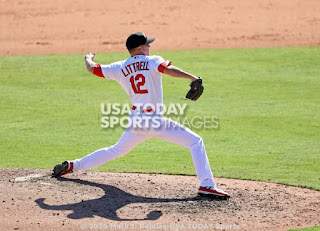 Roberto Canache (former Johnson City-Caribes) entered in the sixth and pitched two innings.  He allowed one hit, no runs, and struck three out.  (p-s:20-14)(g/f:1-1)

Eliezer Alfonzo (former Peoria-Margarita) started as designated hitter and batted fifth.  1-for-5 with three strikeouts.
Breyvic Valera (Memphis-Margarita) entered late in the game in centerfield and batted seventh.  1-for-1 with one RBI and one sac fly. (Video from Lider)
Joshua Lopez (Johnson City-Margarita) started at catcher and batted ninth.  1-for-3 with one walk, grounded into two double plays, and threw out two of three base runners.
Kender Villegas (former Palm Beach-Margarita) entered in the 11th and pitched one inning.  He allowed no hits or runs, two walks, and assisted in one double play for the winning decision (1-0).  (p-s:14-5)(g/f:1-0)

Jesus Ustariz (former Johnson City-Caracas) started as designated hitter and batted fourth.  1-for-3 with one RBI and one walk.

Notes:
Leobaldo Pina (Peoria-Caracas) was out of action due to right knee injury: Caracas Official Site

Aramis Garcia (former 2011 draft selection-Scottsdale) started at catcher and batted seventh.  0-for-3 with one walk, one strikeout, and threw out two base runners.

Alberto Rosario (St. Louis-Estrellas) started at catcher and batted eighth.  0-for-3 with one strikeout and threw out one of one of two base runners.

Ronnie Belliard (former St. Louis-Licey) has turned his life around with help from the Lord: El Caribe

Hector Hernandez (former Palm Beach-Santurce) entered in the sixth and pitched one inning.  He allowed no hits or runs, and struck two out for the winning decision (1-0).  (g/f:0-1)

Anthony Garcia (Memphis-Carolina) started in right field and batted third.  1-for-3 with one run and one walk.

Robby Rowland (Springfield-Caguas) entered in the sixth and pitched two innings.  He allowed one hit, one earned run, one home run, one walk, and struck two out for the winning decision (1-0).  (g/f:0-4)

Allen Cordoba (Johnson City-Panama) started at shortstop and batted second.  1-for-4 with one RBI, one run, and one walk.