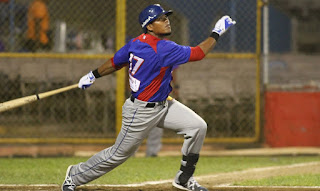 Breyvic Valera (Memphis-Margarita) started at second base and batted third.  2-for-4 with one double, one home run, two RBIs, two runs, one walk, and one caught stealing.

Ronny Cedeno (former MLB signing-Magallanes) started at second base and batted second.  1-for-4 and assisted in one double play.

Ildemaro Vargas (former Palm Beach-Lara) started at second base and batted leadoff.  0-for-2 with one run, two walks (one intentional), and assisted in one double play.

Leobaldo Pina (Peoria-Caracas) started at third base and batted fifth.  2-for-2 with one double
Dail Villanueva (former Peoria-Caracas) entered in the eighth and pitched two batters.  He allowed no hits one earned run, and one walk.

Randy Arozarena (MiLB signing-Navojoa) started in centerfield and batted leadoff.  1-for-4 with one double, one two-out RBI, one run, one walk, and one caught stealing.
Niko Vasquez (former Springfield-Navojoa) started at shortstop and batted sixth.  1-for-2 with two walks, one missed catch error, and assisted in one double play.

Rainel Rosario (former Springfield-Cibaenas) entered late in the game as a pinch hitter and batted seventh.  1-for-1 with one RBI.

Joel Pineiro (former St. Louis-Caguas) started and pitched 4.2 innings.  He allowed three hits, two unearned runs, and struck three out for the losing decision (0-1).  (g/f:11-2)
Robby Rowland (Springfield-Caguas) entered in the ninth and pitched one inning.  He allowed one hit, no runs, and one walk.  (g/f:1-1)

Anthony Garcia (Memphis-Carolina) started in right field and batted fifth.  2-for-4 with one double, one RBI, and one strikeout.

Ronald Ramirez (former Palm Beach-Barranquilla) started at second base and batted ninth.  0-for-3 at the plate.
Jonathan Escudero (Palm Beach free agent-Barranquilla) entered in the sixth and pitched one inning.  He allowed one hit, no runs, and struck three out.  (p-s:15-11)

Malik Collymore (former Johnson City-Sydney) started in centerfield and batted second.  0-for-2 with one run and two walks.

Sydney beat Adelaide 2-0 in game one of doubleheader
Sydney Official Site Post Game
Posted by jrocke217 at 10:33 AM