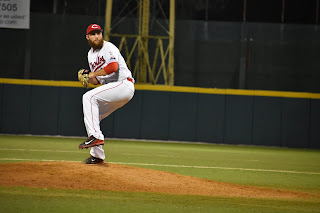 Wilfredo Tovar (MiLB signing-Caracas) started at shortstop and batted leadoff.  1-for-5 and assisted in one double play.

Breyvic Valera (Memphis-Margarita) started at third base and batted third.  1-for-2 with one triple, two runs, one walk, and one hit by pitch.

Magallanes and Lara could play a game in Panama during the 2016-17 season: Magallanes Official Site

Magallanes is open to Johan Santana (Toronto free agent) returning but will not put him out there if he is not ready: Lider

Felix Hernandez (Seattle-Magallanes) will make a couple starts for Magallanes at the end of December to warm up for the World Baseball Classic: El Emergente

Ramon Delgado (former Memphis-Jalisco) entered in the eleventh and pitched to six batters.  He allowed four hits, four earned runs, and one intentional walk for the losing decision (1-1).  (p-s:22-13)(g/f:1-0)

Rainel Rosario (former Springfield-Cibaenas) started in right field and batted fifth.  0-for-2 with one ground into double play.

J.C. Romero (former St. Louis-Santurce) entered in the seventh and pitched one inning.  He allowed one hit and no runs.  (g/f:3-0)

Anthony Garcia (Memphis-Carolina) started in right field and batted fifth.  0-for-4 with one strikeout.

Luis Mateo (former Memphis-Caguas) started in left field and batted seventh.  One walk at the plate.
Robby Rowland (Springfield-Caguas) entered in the sixth and pitched two innings.  He allowed one hit, no runs, and struck three out.  (g/f:0-2)

No Games Scheduled Until Thursday
Posted by jrocke217 at 12:17 PM