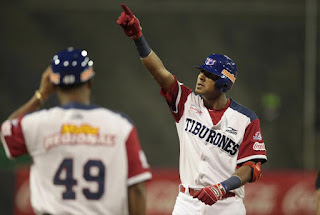 Rafael Ortega (former Memphis-Caribes) started in centerfield and batted leadoff.  2-for-4 with one run.

Jose Martinez (St. Louis-La Guaira) started in right field and batted fourth.  2-for-4 with one home run, six RBIs (four w/two-outs), two runs, and one strikeout.
Johny Celis (former MiLB tryout-La Guaira) started as designated hitter and batted eighth.  1-for-3 with one double, one RBI, one run, and one strikeout.
Jose Gonzalez (former Springfield-La Guaira) entered late in the game as designated hitter and moved to catcher, batting eighth.  One walk at the plate.
Juan Gonzalez (former Memphis-La Guaira) entered in the in the ninth and pitched one inning.  He allowed no hits or runs.  (p-s:10-7)(g/f:2-1)

Jesus Ustariz (former Johnson City-Caracas) started at second base and batted third.  1-for-5 with one strikeout.
Dail Villanueva (former Peoria-Caracas) entered in the seventh and pitched one inning.  He allowed no hits or runs, and struck one out.

Randy Arozarena (MiLB signing-Navojoa) started in left field and batted second.  4-for-5 with one triple, one RBI, two runs, and one stolen base.

Iker Franco (former Springfield-Culiacan) started at catcher and batted ninth.  0-for-2 and threw out one base runner.
Irving Wilson (GCL-Culiacan) entered late in the game at catcher.

Luis Garcia (former New Haven-Hermosillo) entered late in the game as a pinch hitter and batted fourth.  1-for-1 with one double and two two-out RBIs.
David Washington (Memphis free agent-Hermosillo) started in right field and moved to first base, batting seventh.  0-for-2 with one walk, one strikeout, and one fielding error.

Alberto Rosario (St. Louis-Estrellas) started at catcher and batted ninth.  0-for-2 with two strikeouts and one passed ball.

Jose Miguel Fernandez (Matanzas-Cibaenas) started as designated hitter and batted sixth.  1-for-4 with one RBI, one run, and one walk.

Ronald Ramirez (former Palm Beach-Barranquilla) started at shortstop and batted second.  0-for-4 with one RBI, one sac fly, and one strikeout.
Ramon Ulacio (former GCL-Barranquilla) started and pitched six innings.  He allowed three hits, one unearned run, one walk, hit one batter, and struck five out.  (p-s:83-52)