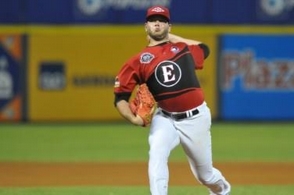 Leobaldo Pina (Peoria-Caracas) started at third base and batted fifth.  0-for-3 and committed one error.
Dail Villanueva (former Peoria-Caracas) entered in the fifth and pitched one inning.  He allowed two hits and one unearned run.

Caracas beat Philadelphia 4-2 in game one of doubleheader

Hector Garcia (former Johnson City-La Guaira) entered late in the game at first base and batted fifth.  1-for-1 with one double.

Lara beat La Guaira 4-1 in game one of doubleheader

Gerwuins Velazco (Palm Beach free agent-Caracas) entered in the eighth and pitched one inning.  He allowed one hit, no runs, one walk, and struck one out for the winning decision (1-0).

Ramon Delgado (former Memphis-Jalisco) entered in the eighth and pitched one inning.  He allowed one hit and no runs.  (p-s:13-9)(g/f:2-1)

Iker Franco (former Springfield-Culiacan) started at catcher and batted eighth.  2-for-3 with one home run, two RBIs (one w/two-outs), one run, one walk, and one passed ball.
Irving Wilson (GCL-Culiacan) entered late in the game at catcher.

Niko Vasquez (former Springfield-Navojoa) started at shortstop and batted sixth.  1-for-3 with one double, one run, and one throwing error.

Juan Herrera (Palm Beach-Estrellas) started at shortstop and batted ninth.  0-for-2 with one strikeout.

Jonathan Rodriguez (Memphis free agent-Mayaguez) started at first base and batted seventh.  2-for-3 and assisted in two double plays.
Pete Parise (former Memphis-Mayaguez) entered in the seventh and pitched one inning.  He allowed one hit, no runs, and struck one out.  (g/f:1-0)
Kevin Herget (Palm Beach-Mayaguez) entered in the ninth and pitched to three batters.  He allowed two hits and no runs.  (g/f:1-0)(ir-s:2-2)

Ronald Ramirez (former Palm Beach-Barranquilla) started at second base and batted ninth.  0-for-3 and one throwing error.