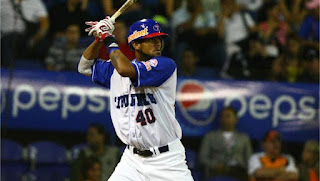 Breyvic Valera (Memphis-Margarita) started in centerfield and batted third.  2-for-3 with one double, one RBI, one run, one intentional walk, and three stolen bases.

Ildemaro Vargas (former Palm Beach-Lara) started at second base and batted leadoff.  2-for-5 with one RBI, two runs, two strikeouts, and assisted in one double play.
Richard Castillo (former Memphis-Lara) entered in the eighth and pitched to two batters.  He allowed no hits, one earned run, and one walk.  (p-s:8-3)(g/f:0-1)(ir-s:3-1)

Jose Martinez (St. Louis-La Guaira) started at first base and batted third.  3-for-5 with three RBIs and one run.
Johny Celis (former MiLB tryout-La Guaira) entered late in the game as designated hitter and batted fifth.  0-for-3 with one run and one walk.
Juan Gonzalez (former Memphis-La Guaira) entered in the seventh and pitched one inning.  He allowed two hits and one earned run.  (p-s:14-8)(g/f:2-1)

Wilfredo Tovar (MiLB signing-Caracas) started at second base and batted ninth.  3-for-5 with three doubles, three runs, and assisted in two double plays.

Ronny Cedeno (former MLB signing-Magallanes) started at second base and moved to shortstop, batting second.  4-for-6 with two RBIs (one w/two-outs), grounded into one double play, and assisted in two double plays.
Jose Martinez (former Springfield-Magallanes) entered late in the game as a pinch runner.

Randy Arozarena (MiLB signing-Navojoa) started in left field and batted leadoff.  0-for-2 with one run, one walk, two stolen bases, and one strikeout.
Niko Vasquez (former Springfield-Navojoa) started at shortstop and batted fifth.  2-for-4 with two strikeouts and assisted in one double play.

Irving Wilson (GCL-Culiacan) started at catcher and batted ninth.  0-for-4 with three strikeouts and one passed ball.

Rainel Rosario (former Springfield-Cibaenas) started at first base and batted seventh.  0-for-3 and assisted in one double play.

Notes:
Delvin Perez (GCL-Carolina) was given permission to play for Carolina but he himself has decided not to: El Vocero