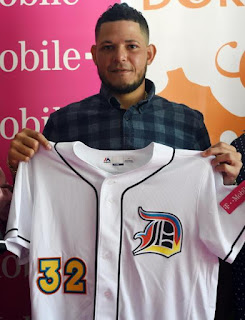 Breyvic Valera (Memphis-Margarita) started in centerfield and bated second.  1-for-2 with two runs, two walks, and one stolen base.
Kender Villegas (former Palm Beach-Margarita) entered in the sixth and pitched to one batter.  He allowed one hit and no runs.  (p-s:7-5)(ir-s:2-1)

Jose Martinez (St. Louis-La Guaira) started in right field and batted fifth.  1-for-3 with one walk and one caught stealing/pickoff.

Breyvic Valera (Memphis-Margarita) started in centerfield and batted leadoff.  2-for-5 with one run and one stolen base.
Silfredo Garcia (Springfield-Margarita) entered in the fifth and pitched 1.1 innings.  He allowed one hit, no runs, and one walk.  (p-s:13-7)(g/f:2-0)(ir-s:2-0)

All Wednesday's Games Were Suspended

Aramis Garcia (former 2011 draft selection-Scottsdale) started at catcher and batted sixth.  0-for-3 with one two-out RBI, two strikeouts, and threw out one of two base runners.

Notes:
Efren Navarro (Memphis-Hermosillo) will play for the Mexican team for the Tokyo exhibition set for November 10-11, 2016: Mister Baseball

Eugenio Velez (former Memphis-Azucareros) started in left field and batted leadoff.  1-for-3 with one walk and one fielding error.

Eliezer Alvarez (Peoria-Escogido) started as designated hitter and batted seventh.  1-for-5 with one double and one run.

Yadier Molina (St. Louis-Carolina) says he would love to end his career in St. Louis but also wouldn't mind going through the free agency process.  They have begun the early process of negotiating with St. Louis but no numbers exchanged: El Vocero

Carlos Baerga (former St. Louis-Aguadilla) is not concerned with Aguadilla's slow start and is not making any excuses for it: El Vocero

Hector Salazar (former GCL-Panama) has made two relief appearances posting a 1-0 record and 4.50 ERA.  He's allowed one hit, one earned run, one home run, one walk, and struck two out over two innings.

Dilson Herrera (Cincinnati-Sincelejo) will play for Sincelejo but Jorge Alfaro (Philadelphia) will not: El Universal

Colombian players will put on a showcase for MLB organizations on Thursday: El Universal
Posted by jrocke217 at 11:33 AM