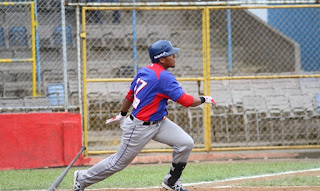 Luis Montanez (former Memphis-Luquillo) 2-for-5 with one RBI and one run.

Ronny Cedeno (former MLB signing-Magallanes) started at shortstop and batted sixth.  3-for-5 at the plate.

Roberto Canache (former Johnson City-Caribes) entered in the seventh and pitched to four batters.  He allowed two hits, no runs, and struck one out.  (p-s:18-13)(g/f:1-0)
Pedro Rodriguez (former MiLB signing-Caribes) entered in the ninth and pitched one inning.  He allowed no hits or runs, and struck one out.  (p-s:18-14)(g/f:1-1)

Wilfredo Tovar (MiLB signing-Caracas) started at shortstop and batted leadoff.  1-for-4 with one strikeout and assisted in one double play.

Notes:
Pedro Rodriguez (former MiLB signing-Caribes) is still able to lock down games even after taking a short period of time off: LVBP Official Site

LVBP issues statement on teams giving away balls during or after games: Lider

Dail Villanueva (former Peoria-Caracas) entered in the seventh and pitched to four batters.  He allowed no hits or runs, two walks, threw one wild pitch, and struck one out.

Cesar Valera (former Palm Beach-Caribes) started at shortstop and batted seventh.  1-for-4 with one RBI.

Irving Wilson (GCL-Culiacan) started at catcher and batted ninth.  3-for-4 with one run and one strikeout.

Eugenio Velez (former Memphis-Azucareros) started in left field and batted ninth.  1-for-4 with one run and grounded into one double play.

Maikel Cleto (former St. Louis-Licey) entered in the eighth and pitched to four batters.  He allowed no hits, one earned run, and two walks for the hold (1).

Malik Collymore (former Johnson City-Sydney) started in centerfield and batted second.  2-for-4 with one RBI and one walk.

No Games Scheduled Until Thursday
Posted by jrocke217 at 11:39 AM