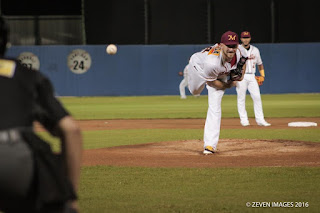 Jose Martinez (former Springfield-Magallanes) started at second base and batted second.  2-for-4 with two doubles, one run, two strikeouts, and assisted in one double play.
Ronny Cedeno (former MLB signing-Magallanes) started at shortstop and batted sixth.  2-for-4 with one run and assisted in one double play.
Jorge Rondon (former St. Louis-Magallanes) entered in the ninth and pitched to two batters.  He allowed no hits or runs, and two walks.  (p-s:11-3)

Breyvic Valera (Memphis-Margarita) started at third base and batted third.  1-for-3 with one double, one walk, and one strikeout.
Kender Villegas (former Palm Beach-Margarita) entered in the eighth and pitched one inning.  He allowed two hits, two earned runs, one home run, and struck one out.  (p-s:14-9)(g/f:1-1)

Victor Marte (former St. Louis-Aragua) entered in the eighth and pitched two innings.  He allowed two hits, one earned run, one home run, one walk, threw one wild pitch, and struck one out.  (p-s:29-21)(g/f:3-2)

Jose Martinez (St. Louis-La Guaira) started in right field and batted third.  2-for-4 with one home run, one RBI, one run, and grounded into one double play.
Jose Gonzalez (former Springfield-La Guaira) started at catcher and batted eighth.  1-for-4 with two strikeouts.
Geudy Guerra (former VSL-La Guaira) entered in the seventh and pitched one inning.  He allowed two hits, one unearned run, and one walk.  (p-s:18-9)(g/f:2-1)

Notes:
The offense is stalling around Breyvic Valera (Memphis-Margarita): Lider

Here is a snippet from a documentary on David Peralta (former Johnson City-Margarita): El Emergente

Alex Cabrera (Aragua) accuses the league of trying to force him into retirement after failing several drug tests: El Emergente

Irving Wilson (GCL-Culiacan) entered late in the game at catcher and batted eighth.  One walk at the plate.

Tommy Pham (St. Louis-Escogido) started in centerfield and batted ninth.  0-for-1 with two runs, one walk, one sacrifice, and one strikeout.

Hector Luna (former St. Louis-Cibaenas) started as designated hitter and batted fourth.  2-for-4 with one RBI and one strikeout.

Donovan Solano (former Memphis-Licey) started at third base and batted seventh.  0-for-3 with one RBI, one sac fly, and one strikeout.

Eugenio Velez (former Memphis-Azucareros) started in left field and batted third.  0-for-1 with one run, one intentional walk, two sacrifices, and one stolen base.

Tyler Herron (former Springfield-Mayaguez) entered in the eighth and pitched one inning.  He allowed no hits or runs, and struck one out for the save (4).  (g/f:0-2)(ir-s:2-0)

Randy Ruiz (former MiLB signing-Caguas) started as designated hitter and batted fifth.  1-for-3 with one double, one walk, and one strikeout.