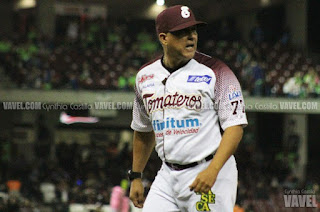 Rafael Ortega (former Memphis-Caribes) started in centerfield and batted leadoff.  0-for-5 with one strikeout.
John Church (former Memphis-Caribes) entered in the seventh and pitched to one batter.  He allowed no hits or runs for the hold (4).  (p-s:5-4)(g/f:1-0)(ir-s:2-0)
Roberto Canache (former Johnson City-Caribes) entered in the eighth and pitched to four batters.  He allowed one hit, one earned run, and one intentional walk for the blown save (1) and losing decision (1-2).  (p-s:19-10)(g/f:2-0)(ir-s:1-1)

Ronny Cedeno (former MLB signing-Magallanes) started at second base and batted second.  0-for-5 and assisted in one double play.

Jose Martinez (St. Louis-La Guaira) started in right field and batted third.  3-for-4 at the plate.
Pedro Echemendia (Memphis-La Guaira) entered in the eighth and pitched one inning.  He allowed two hits and one unearned run.  (p-s:20-14)(g/f:2-1)

Irving Wilson (GCL-Culiacan) entered late in the game at catcher.
Dennys Reyes (former St. Louis-Culiacan) entered in the seventh and pitched to one batter.  He allowed no hits or runs, and struck one out.  (p-s:4-4)(ir-s:2-0)

Tommy Pham (St. Louis-Escogido) started in centerfield and batted third.  0-for-3 with one walk, one stolen base, and one strikeout.

Hector Luna (former St. Louis-Cibaenas) started as designated hitter and batted fifth.  1-for-4 with one run and one strikeout.

Jonathan Rodriguez (Memphis free agent-Mayaguez) started as designated hitter and batted sixth.  0-for-3 with two RBIs (one w/two-outs), one walk, one sac fly, two strikeouts, and grounded into one double play.
Pete Parise (former Memphis-Mayaguez) entered in the fifth and pitched one inning.  He allowed four hits and one earned run for the winning decision (1-1).  (g/f:2-0)(ir-s:1-1)

Ronald Ramirez (former Palm Beach-Barranquilla) started at second base and batted ninth.  0-for-4 with one RBI, one walk, and one strikeout.

Jose Calero (former GCL-Sincelejo) started and pitched five innings.  He allowed two hits, one earned run, one walk, hit one batter, threw one wild pitch, and struck one out.  (p-s:69-42)