Cardinals Winter League Notebook 12-13-15: Jose Martinez Collects Three Singles & One RBI; Breyvic Valera Singles & Drives In One Run; Pedro Rodriguez Strikes Out One Over One Scoreless Inning For The Save 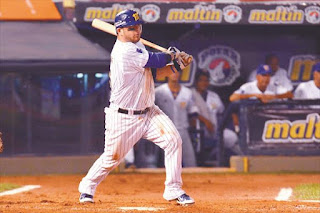 Eliezer Alfonzo (former Peoria-Margarita) started as designated hitter and batted second.  0-for-3 with one walk and was ejected in the seventh inning.
Breyvic Valera (Springfield-Margarita) started at third base and batted fifth.  1-for-4 with one RBI, one sac fly, and one stolen base.
Justin Wright (Memphis-Margarita) entered in the ninth and pitched to three batters.  He allowed one hit and no runs.  (p-s:8-7)(g/f:1-1)(ir-s:1-1)

Ildemaro Vargas (former Palm Beach-Lara) started at second base and batted leadoff.  1-for-3 with one walk, one stolen base, and assisted in one double play.

David Bergin (former Quad Cities-Boer) started as designated hitter and batted fourth.  0-for-3 with two walks and two strikeouts.
Fidencio Flores (former GCL-Boer) entered in the sixth and pitched 1.1 innings.  He allowed two hit, no runs, and struck one out.  (g/f:2-1)(ir-s:3-1)
Jhonny Polanco (former Springfield-Boer) entered in the ninth and pitched one inning.  He allowed no hits or runs, and one walk.  (g/f:1-0)

Hugo Castellanos (former Memphis-Acayucan) entered in the sixth and pitched two-thirds of an inning.  He allowed one hit, one earned run, and one walk for the losing decision.  (g/f:2-0)

Francisco Rivera (former Springfield-San Andres) started in left field and batted third.  0-for-2 with one walk and grounded into one double play.