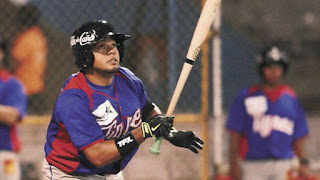 November 30, 2015:
Hector Garcia (former Johnson City-La Guaira) started in left field and moved to first base, batting fourth.  2-for-5 with one RBI, one run, and one strikeout.

Jhohan Acevedo (State College-Caracas) started in right field and batted leadoff.  2-for-4 with two RBIs, two runs, one walk, and two strikeouts.
Dail Villanueva (former Peoria-Caracas) entered in the seventh and pitched one inning.  He allowed one hit, no runs, and struck two out.  (g/f:0-1)

Iker Franco (former Springfield-Obregon) started at catcher and batted ninth.  2-for-2 with one double, one home run, two RBIs (one w/two-outs), one run, one walk, one sacrifice, and threw out one of two base runners.

Alberto Rosario (Memphis free agent-Estrellas) started at catcher and batted ninth.  2-for-3 with one two-out RBI and threw out one base runner.

Eugenio Velez (former Memphis-Azucareros) started in left field and batted leadoff.  4-for-5 with one home run, one RBI, one run, and one caught stealing.

Luis Mateo (former Memphis-Caguas) started at shortstop and batted second.  0-for-3 with one walk, one sacrifice, one strikeout, and assisted in one double play.

Omar Javier (former Johnson City-San Andres) entered in the ninth and pitched one inning.  He allowed two hits, two earned runs, threw one wild pitch, and struck one out.  (g/f:1-0)