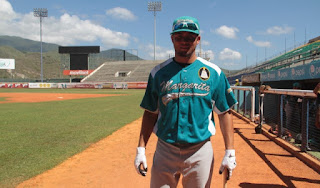 Ildemaro Vargas (former Palm Beach-Lara) started at second base and batted second.  1-for-4 with one triple, one RBI, and one strikeout.
Richard Castillo (former Memphis-Lara) entered in the sixth and pitched one inning.  He allowed two hits, two earned runs, one home run, one walk, and struck one out.  (p-s:26-16)(g/f:1-0)

Luis Garcia (former New Haven-Hermosillo) entered late in the game at first base and batted sixth.  0-for-2 with one ground into double play and assisted in one double play.

Hector Luna (former St. Louis-Cibaenas) started as designated hitter and batted fourth.  1-for-4 with one triple, one RBI, one run, one walk, and one strikeout.

Notes:
Jonathan Escudero (Johnson City-Barranquilla) was named to the 2016 All-Star team: LCBP Official Site
Posted by jrocke217 at 11:05 AM