Kurt Heyer From The Dominican League 2015 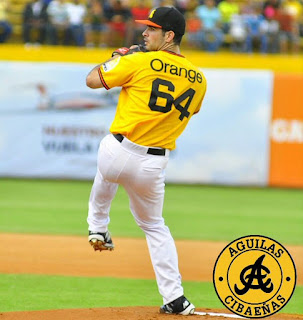 
Kurt Heyer spent the 2015 season transitioning from starting pitcher long reliever for the St. Louis Cardinals organization.  He pitched a majority of the season at Double-A Springfield and rounded out the year at Triple-A Memphis.  Between both levels, the right-hander struck out 57 and walked 23 over 83.2 innings while earning a 7-2 record, three saves, and 4.09 ERA on 41 appearances (six starts).

The 2012, six round selection made his way down to the Dominican League for a handful of games, to finish off the winter regular schedule and potentially catch the eye of the Cardinals staff as a future MLBer.  Heyer was set to come out of the bullpen for Aguilas Cibeanas but the team came up short on a player and he was inserted into the rotation.  There he made three starts logging 12.2 innings allowing 12 hits, eight runs (four earned), four walks, and striking out eight for a 1-1 record.   He was also selected in the LIDOM playoff draft by Tigres del Licey, but does not intend to continue hurling.

I asked Kurt to share some of his thoughts on his experience:

"After my time playing baseball in the DR I came to realize that my love for this game only deepened. When pitching in front of thousands of fans it felt like I was always pitching game 7 of the World Series. It was a very intense environment and it's not everyday you get candy thrown at you from the stands. What also made it special I had teammates that took time to help me get better and further my knowledge for the game. In the process I was able to start developing a cutter to add to my arsenal. This experience made me grow as a player and a person. I hope next year I will have the same opportunity."

Please feel free to follow and interact with Kurt on twitter @KurtHeyer
Posted by jrocke217 at 10:58 AM